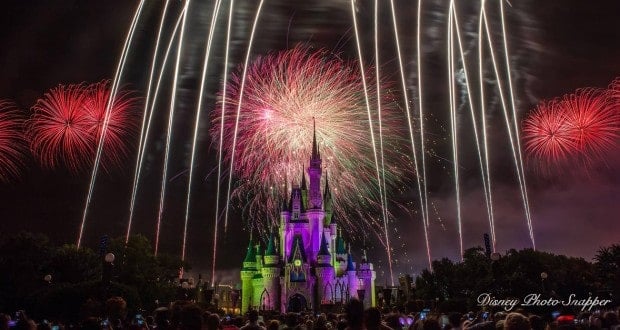 Disney seems to take the age-old adage “save the best for last” as serious as they take
entertaining their guests. Here are 8 Mind Blowing Facts about the Wishes Nighttime
Spectacular at Disney World:

8. Concept. The show was specifically designed to draw everyone to Cinderella’s castle in the evening with the intent of bringing family and friends together to make memories. Show
creator Steven Davison said “they all might have different experiences during the day but at
night we’re asking everyone to come to the Magic Kingdom to watch what happens when family
and friends all make a wish together and see what happens in the sky”.

7. Tradition. Though the end of the night show has changed over the years, one constant has been Tinkerbell. Taking flight for the first time on July 4, 1985, this year will mark 30 years that Tinkerbell has thrilled crowds with her flight from the castle!

6. Custom Special Effects. Disney had pyrotechnics custom engineered to be tailored specifically for the Wishes Nighttime Spectacular. The show’s “wishing star” was designed to peak 100 feet above the castle’s spires. In addition, the Blue Fairy from Pinocchio is represented with a star-shaped shell which “draws” each wish in the sky using enchanted “starlight”.

3. Tinkerbell. During the show, Tinkerbell suddenly appears out of nowhere near the top of Cinderella’s castle and proceeds to fly about 850 feet across the Magic Kingdom towards Tomorrowland. Her fast-flying trip takes less than 30 seconds to cover the almost three football
fields of distance that she travels.

2. Pyrotechnics. Disney incorporates an astounding 683 individual pieces of pyrotechnics into the show. That’s a lot of light and heat to pack into twelve minutes of entertainment.

1. Cues. If you are a fan of fireworks, then the Wishes show is for you! Disney utilizes a mind-boggling.

557 fireworks firing cues for the production. The display at the Magic Kingdom costs about $33,000 to put on – making Disney the largest consumer of fireworks in the world. Disney spares no expense when it comes to entertaining their guests – and the Wishes Nighttime Spectacular at Cinderella’s castle is no exception. Through a combination of nostalgic Disney movies, iconic characters, and special pyrotechnics engineered specifically for “Wishes”, this extraordinary show is sure to make the magic come alive for attendees of any age.

For more interesting facts about Wishes and the best places in Magic Kingdom to view the show, consider planning and booking your next Disney trip with an Authorized Disney Vacation Planner you can trust like Mickey Travels. They’ll help you get the best price for your vacation, share expert advice and their services are totally FREE! It’s genius!