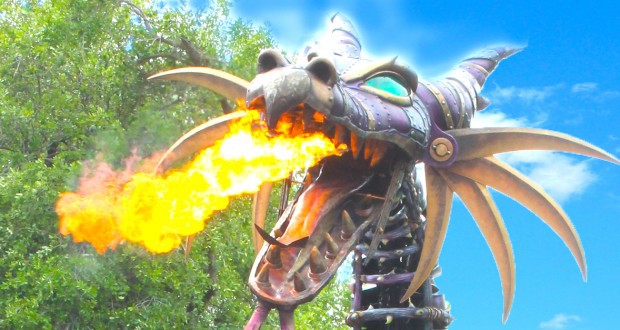 9 Most Notorious Disney Villains – The Bad Guys And Gals We Love To Hate!

What would a movie be if it didn’t have a bad guy? It’d be pretty boring, don’t you think? Yes, we always root for the good guys. But you have to admit; Disney has come up with some pretty awesome villains. We all have a little love for our crazy Disney villains. Here are 9 notorious Disney villains we love to hate!

Okay, so she tricked a naïve, young girl into giving her voice away… But she was very creative in her planning. With an incredibly catchy song, she persuades Ariel into giving up her voice to become human. That’s not all though, she also changed herself into an eye-catching beauty to distract Eric from marrying Ariel. She then gains power of the entire ocean before Eric saves the day. Although she is inherently evil, she does it in a very unique way. And we applaud her for that.

Also known as one of the most deceitful people in all of Disney history. He clearly had us fooled when he posed as a funny, handsome prince in love with Anna. Who knew he was planning to take over Arendelle? I mean come on, they finish each other’s sandwiches! Then to leave Anna there to die while imprisoning Elsa, how horrible! He is definitely one of the most evil princes, but who knew evil could look so good!

Gaston (Beauty and the Beast)

He’s probably one of the more liked villains. According to him, he’s the guy every girl wants and every guy wants to be. It’s a shame he has to be so cruel. He essentially tried to murder Beast and send Belle’s father away. He may be attractive, but he needs a few lessons in how to win over a girl. Trying to force Belle to marry him probably wasn’t the best move. Neither was throwing her book in mud… But regardless, he’s definitely a memorable Disney bad guy!

Undoubtedly one of the most comical of all the Disney villains, Captain Hook and his sidekick Mr. Smee make this film even better. Aside from his comedic side, Hook is a very dangerous villain. He sets sail to seek revenge on Peter Pan for cutting off his hand. Although very dangerous and powerful, Captain Hook would really be lost without Mr. Smee. In the end, Hook has two really bad flaws, his obsession with revenge on Peter Pan and his undeniable fear of crocodiles. But we love him anyway!

The Evil Queen (Snow White and the Seven Dwarfs)

Jealousy and conceitedness are what motivates this evil queen to plan to kill her stepdaughter, Snow White. At first she sends the huntsman to do her dirty work for her. But after he is unsuccessful, she takes on the task herself. I give her props for changing it up a bit and moving away from the usual antics. Not only does she transform herself into an old hag as a disguise, but also used poison in the form of an apple for her weapon. Such an imaginative scheme, in my opinion.

One of the most upsetting movie scenes of my childhood was the death of Mufasa. And to think it was all because of his brother, Scar. He’s selfish, bitter, and very conniving. He is basically the crazy, jealous uncle, hungry for power. Despite all of that, he does have a pretty sweet singing voice. We all love his powerful villain anthem, Be Prepared!

If she doesn’t scare you, no evil thing will… I bet her song popped right into your head. Who could ever forget Cruella? The heartless, fur coat-loving woman with a bad smoking habit! They don’t call her Cruella for nothing! But she didn’t stand a chance against 101 wonderful Dalmatian puppies and a boatload of helpful animals. She fought a good fight though!

Lady Tremaine is probably one of our classier villains. On the outside she looks like your regular wealthy, snooty woman, but on the inside, she’s pure evil. Motivated by her jealousy of Cinderella’s beauty, she is mentally and verbally abusive and tries to isolate Cinderella from the outside world while making her the servant. Although Lady Tremaine has no physical powers, she uses her mind to become a spiteful villain in Cinderella’s life. We have to give it to her; she makes being evil look so easy.

Ah, Maleficent… Misunderstood and somewhat of a misfit, her anger is in full rage and she will do anything to make that known. Heartbroken by not getting invited to Aurora’s royal christening, she puts a curse on Aurora so that she will die just before her sixteenth birthday. When things don’t go as planned, a full on war breaks out. Being the hardcore villain she is, she transforms herself into a fiery dragon. There aren’t too many villains out there who can be an evil fairy one minute and a monstrous dragon the next. She wins my vote for coolest villain ever!

Even though these villains have placed some of our favorite heroes and heroines in some pretty dangerous situations, we can’t help but love these bad guys and gals. Without them, these films would be nothing! So next time you watch one of your favorite Disney movies, take time to appreciate the crazy villains of each one.