Anyone who has seen Disney’s Enchanted knows that Amy Adams can play a Disney princess. Her portrayal of Princess Giselle, “a quasi-parody of classic Disney princesses“, was stellar! Audiences have waited fourteen years for a sequel, and now the movie (called Disenchanted ) has finally been made! Amy Adams spoke to Jimmy Fallon on The Tonight Show, and shared some tidbits about the movie (which Walt Disney Studio just finished filming this summer).  The Disenchanted movie is meant to be set in Monroeville, a suburb that Princess Giselle and her new non-fairytale family move to. But a leader of the suburb, Malvina Monroe, has different plans. 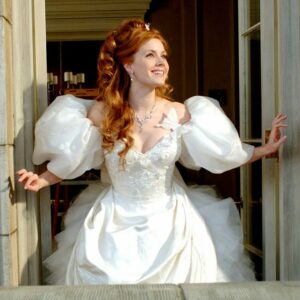 When asked about the movie, Amy Adams said that “it was a lot of fun to film”! “We filmed it in Ireland” she said. “Everyone is back [and] we also have great additions to the cast…some other great people. We have Maya Rudolph…she’s amazing. She’s so great in it. She plays the baddie, so we get to have a lot of fun together”. We also know that Idina Menzel is back, which is interesting; either she’ll be brought back from the magical animated fairy tale dimension, or Giselle and her loved ones will end up in it! We’ll also be curious to see how things are going with Idina’s character and the Prince (played hilariously by James Marsden), since they got married in the animated Enchanted Forest.

If you enjoyed the musical number in Central Park from Enchanted, then you’ll be pleased to see more musical numbers in Disenchanted. “There’s a lot more singing and a lot more dancing, which was humbling,” Amy said. “The last time I really danced as much as I’m required to dance in this I was in my 20s, and now I’m not in my 20s. And it feels different in your 40s. In my heart, I look like I’m in my 20s when I’m dancing, and then I would watch playback and be like ‘whoa, that’s not the same.'” 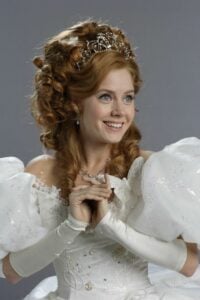 We’re sure that Amy will be great as Giselle a second time, and are excited to see the film (particularly if there’s more singing and dancing) when it comes to Disney Plus!