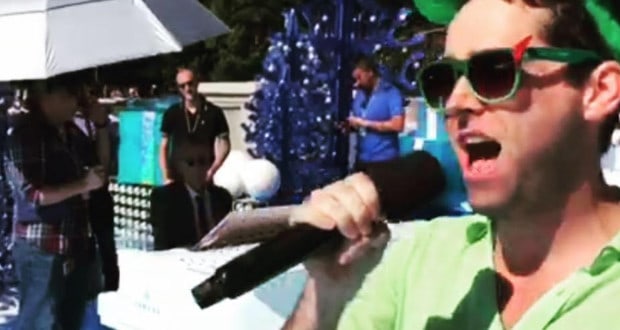 Ariana Grande 3 Hours Late To Taping Of Disney Parade… Then This Happens!

Every year, Disney tapes their annual Christmas Day parade in early November. Performances by music legends such as Reba McEntire, Seal, Jason Derulo and Ariana Grande are part of the action. Well, a funny thing happened during the taping of the Christmas Parade today at Magic Kingdom. When an extremely tardy Ariana Grande left the stage empty and the crowd waiting over an hour, Disney producers scrambled and attempting to pull a few guests from the crowd to “perform.” A few eager folks attempted to wow the crowd and then a particular young man began to sing just off stage to producers who immediately told him to stop so he could continue to croon on stage.

Accompanied by the renown pianist David Foster, this young man proceeded to blow the crowd away with his spectacular voice! One audience-goer grabbed a clip on his phone and posted it on his facebook page and the video immediatly went viral. The singer’s name is Rhett Wheeler and he’s had a life-long dream of catching his “big break” and being discovered. Eventually Ms. Grande appeared and Rhett happily surrendered the stage. What’s in store now for Rhett after this amazing experience is anybody’s guess but there are rumors that Disney may include him in the Christmas parade.

Ariana’s being late to the stage may have been enough to launch this young man into super-stardom. We’re sure Rhett is glad he was in the right place at the right time and hope this experience is just the first step in making his dreams come true. After all that’s Disney’s promise/tagline for all its’ guests, but in this case, the dream may just become reality! We want to know what you think about this. Share your comments on Facebook.

Click here to watch the video of Rhett’s performance.