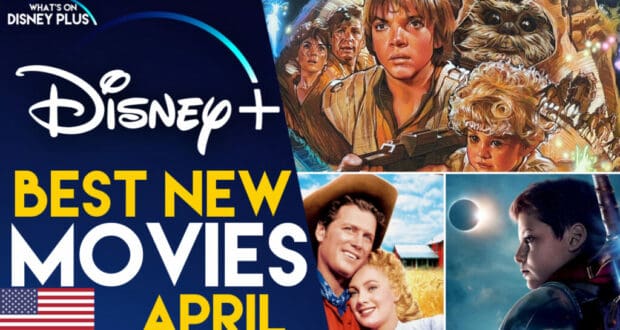 Best Movies to Watch in April!

As we start a new month, it is time to start planning what to watch. WhatsOnDisneyPlus has their top suggestions for movies to watch in April. Take a look and see what you think about their selection.

The Kid Who Would Be King

Alex, a 12-year-old boy, and his friends fight an evil sorceress with the help of Excalibur, the sword of King Arthur, in a bid to save the world from her atrocities.

This joyous celebration of frontier life combines tender romance and violent passion in the Oklahoma Territory of the 1900s with a timeless score filled with unforgettable songs. Rodgers and Hammerstein’s hit Broadway musical.

Oklahoma! is coming to Disney+ on Friday 30th April.

Three bumbling crooks pose as photographers to kidnap the son of a millionaire. But the baby turns out to be smarter than them, making it difficult for them to hold on to him.

Captured by smugglers when he was just a hatchling, a macaw named Blu never learned to fly and lives a happily domesticated life in Minnesota with his human friend, Linda. Blu is thought to be the last of his kind, but when word comes that Jewel, a lone female, lives in Rio de Janeiro, Blu and Linda go to meet her. Animal smugglers kidnap Blu and Jewel, but the pair soon escape and begin a perilous adventure back to freedom — and Linda.

With the help of Babi the monkey and Cammy the camel, the buddies head for ancient Egyptian ruins in search of treasure.

Treasure Buddies is coming to Disney+ on Friday 16th April

It’s the 17th century, and Native American Squanto (Adam Beach) roams free in the New World until he’s captured by visiting sailors who take him back to England. Monk Brother Daniel (Mandy Patinkin) teaches him social customs, but other Englishmen aren’t as kind. Squanto becomes the unwilling star of performances that highlight his fighting skills, but he eventually engineers a return trip to America. He finds that his home has changed forever, and he must chart a new path for his people.

Squanto: A Warrior’s Tale is coming to Disney+ on Friday 9th April.

Three avid bird-watchers pursue the winner’s title to achieve the world record of spotting the highest number of birds during the Big Year event as the title holds a special meaning for each one.

The Big Year is coming to Disney+ on Friday 2nd April.

Night At The Museum

Larry, a night security guard at the Museum of Natural History, gets some help from the exhibits who come alive at night to foil a robbery attempt of a magic tablet and proves that he is not a loser.

Night at the Museum: Battle of the Smithsonian

Larry Daley has to infiltrate the Smithsonian Institution to rescue Jedediah and Octavius after they are accidentally shipped there along with a few artefacts.

Both of the Night Of The Museum films will arrive on Disney+ on Friday 2nd April.

When a family’s spacecraft crashes on the forest moon of planet Endor, teenage son Mace (Eric Walker) and his little sister, Cindel (Aubree Miller), find themselves separated from their parents. Soon these lost children encounter the Ewoks, the small and furry warriors who call the moon home. With the help of these adorable yet fearless natives, brother and sister set out on a quest to rescue their parents from the grip of a vicious monster known as the Gorax.

Marauders raid the Ewok village and steal a power supply they believe to be magical. Wicket helps Cindel escape the evil witch Charal, and they befriend a hermit who may help them save the village.

Both of the Ewok films will arrive on Disney+ on Friday 2nd April.

Man of the House

Despite having a dangerous criminal with a vendetta after him, attorney Jack Sturges (Chevy Chase) has a tougher adversary to worry about — his girlfriend’s son, Ben (Jonathan Taylor Thomas). As Sturges and Ben’s mom, Sandy (Farrah Fawcett), become more serious, Ben increasingly ups his efforts to sabotage the relationship, since he has no intention of giving up his prime spot in the household dynamic. Sturges is determined to connect with Ben, but Ben is going to make him work for it.

Man of the House is coming to Disney+ on Friday 9th April.

The story revolves around the White Fang and Henry who get washed away by the ocean current. They land up in a tribal area and help the tribals in saving their sacred land.

White Fang 2: Myth of the White Wolf is coming to Disney+ on Friday 16th April

What will you be watching in April?