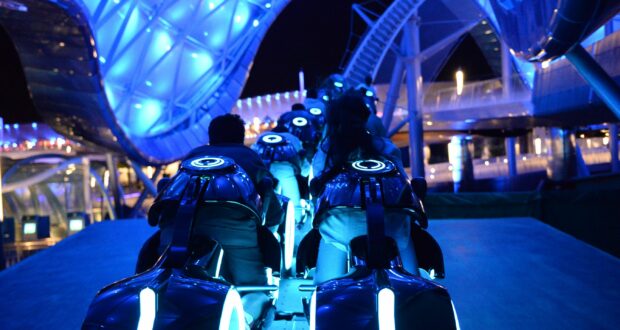 Ever since Disney unveiled plans for TRON Lightcycle Power Run during the July 15, 2017 D23 Expo, fans have been eagerly awaiting word on any and all developments along the way. Well, at long last we have a host of emerging details to report on in regards to the new ride’s theme, innovations, and other fascinating tidbits you’re going to want to know. While finalized plans are still underway for this highly anticipated work-in-progress thrill ride, which is already expected to be a top attraction once it is in full swing, here’s what we know so far about Walt Disney World’s TRON Lightcycle Power Run.

The new high-speed TRON Lightcycle Power Run Rollercoaster will be making its home at Magic Kingdom Park, located within the Tomorrowland section. As Tomorrowland is host to plenty of other likeminded themed adventures of a varying nature, this seems like the perfect place. It will be housed inside a large canopy of brightly shifting translucent colors, located in an entirely new area, next to the land’s other thrilling coaster—Space Mountain. Furthermore, the plot of land it will occupy was at one time considered for a Disney World duplicate of Disneyland’s successful Matterhorn Bobsleds, but those plans never came to fruition. And while the ride will be in a brand new area all its own, rather than replacing any existing attractions, ongoing construction efforts have affected and resulted in the temporary halt to Walt Disney World Railroad operations nevertheless.

As previously stated, the announcement to bring TRON Lightcycle Power Run to Walt Disney World Resort in Florida was first made during the D23 Expo on July 15, 2017. But the attraction itself is neither new nor will it be a Walt Disney World exclusive. The first TRON Lightcycle Power Run coaster was introduced in Shanghai Disneyland, on June 16, 2016 when the park first opened. Not surprisingly, it quickly went on to become the highest-rated attraction in the entire park. Even less surprising is the fact that Walt Disney World Resort in Florida would want to get a piece of that and follow suit.

It goes without saying that the theme for this ride draws inspiration from both the original 1982 movie TRON and its 2010 sequel TRON: Legacy. Furthermore, it is an exact replication of the famed Shanghai Disney attraction in just about every way, excluding obvious locational distinctions. The coaster-style design takes on a two-wheeled mounted-bike approach (which we will cover in more detail below) for a thrilling race along a digital Grid-inspired track as seen in the TRON movies. Riders are sure to be in awe by the stunning nighttime displays and neon lighting, with accompanying music tracks from Daft Punk, straight out of TRON: Legacy.

This new rollercoaster comes with a vast array of special features and innovations worth noting. First there’s the motorcycle design, unlike traditional box-seated rollercoaster models that utilize bars and lap restraints. For TRON Lightcycle Run, riders will take to mounting their very own two-wheeled cycle and remain in a straddling position throughout the duration of the thrilling experience. And what thrills they will be too! With climaxing speeds of up to 60 miles per hour, this coaster is already being toted as the fastest one to ever open at Walt Disney World Resort. Riders will be launched from inside the canopied part of the track known as the Upload Conduit and go zipping along Grid-inspired neon scenes located both inside and outside through special effect-filled displays of light, sound, and that accompanying soundtrack we previously touched on. Incorporating the cycling model rather than traditional seated styles allows for more freedom while still securing guest safety via back supports. And while still novel in regards to rollercoasters, this setup has been incorporated before in another popular Disney attraction—Avatar Flight of Passage, located within Disney’s Animal Kingdom Park. Universal Studios also did something similar with their Harry Potter-inspired attraction Hagrid’s Magical Creatures Motorbike Adventure.

While TRON Lightcycle Run was originally slated to open in October of 2021, just in time for Walt Disney World’s 50th anniversary celebrations, delays are imminent, due to the recent health crisis, which has wreaked havoc on many other park-wide developments as well.  At the moment, there has been no official word on what the new opening date will be, but strong supporting evidence suggests a tentative opening planned for sometime in the spring or summer of 2022.

We hope we’ve given you a little more insight into what to expect from the new TRON Lightcycle Run coming to Walt Disney World Resort. Furthermore, we hope to instill you with renewed hopes for a better tomorrow at Walt Disney World Resort. Knowing that such attractions are still in the works with emerging developments constantly underway makes the wait all the more worthwhile.