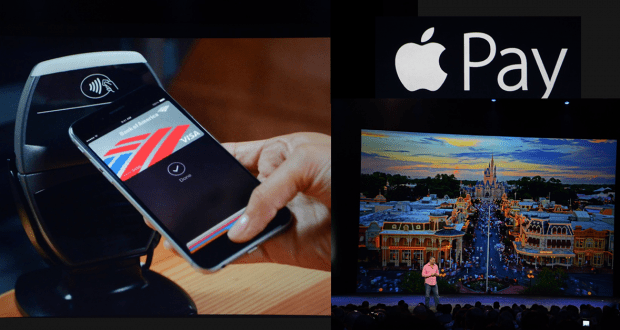 Announced today at the Apple iPhone6 conference, a new payment system called Apple Pay that will be available for use at Disney World and the Disney Retail Stores before Christmas 2014.

Apple Pay will be become a payment option at some of the countries largest retailers including Macy’s, Walgreens, Staples, Subway, McDonald’s, Whole Foods.

To make a payment, point your iPhone to the card reader and use the built in iPhone6 fingerprint reader to authorize the payment.

The Apple Pay system will be available initially on the new iPhone6 line of phones that are equipped with NFC ( Near Field Communication ) radios.
This payment system will not be backward compatible with older iPhones.