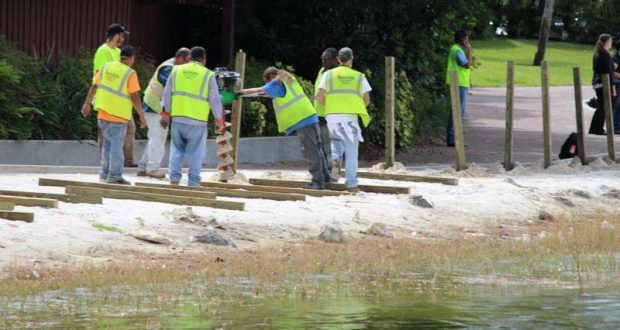 More changes at Disney World in response to the alligator attack that claimed the life of a 2-year-old Tuesday night at the Grand Floridian Resort. Resort beaches and Marinas have been closed since Wednesday morning. In addition to changes coming to signage, the next wave of safety measures has begun.

Work crews have begun erecting a fence at the shoreline of Seven Seas Lagoon. Work is currently being done at the Grand Floridian and the Wedding Pavilion. It is safe to assume fences will be put up at the Polynesian as well. Disney work crews are using wooden posts indicating this is likely a temporary structure. There is no information on how long the fence will remain up or if a permanent fence will be erected at a later time.

By now, most people have heard about the terrible tragedy that took place Tuesday night when a 2-year-old boy was attacked on the beach at the Grand Floridian Resort. Not surprisingly, Disney took swift action during the incident to assist law enforcement, help the grieving family and ensure the safety of other guests. Changes have already begun at Disney.

Disney World announced Wednesday it was closing all beaches at all resorts out of an abundance of caution. All marinas and water transportation around the Magic Kingdom were closed as well. As of Thursday morning, ferry boat service between the Ticket and Transportation Center and Magic Kingdom has been resumed. All beaches and marinas remain closed.

We expect all beaches, water transportation and marinas to eventually reopen after a thorough investigation has been completed and any possible additional safety measures are identified and implemented. As for now, guests staying in Magic Kingdom Resorts should plan accordingly for travel around Disney World. Disney has added additional bus service to accommodate guests.

Another change has come over at the Jungle Cruise in Magic Kingdom. The Jungle Cruise, a boat-ride through the famous rivers and jungles from around the world and featuring numerous animatronic animals, is built around a variety of corny jokes, puns and gags. One section of the ride has guests traveling among animatronic crocodiles with several jokes centered on their danger and attacks. For example, one joke warned parents to “watch their children, or the crocodiles will.” All such jokes have been removed from the ride script.

Disney also announced it would be reviewing signage around its many on-property bodies of water to determine if more explicit warning is needed. All beaches currently have no swimming signs posted. However, many have discussed whether this adequate to warn visitors of the risks associated with open water in Florida.

While not announced, expect Disney to alter its policy of alligator removal as well. Currently, Disney has a policy of removing and relocating alligators over a certain size and any alligators who display aggression regardless of size. This is standard policy in central Florida and the Florida Wildlife Commission described Disney Worlds efforts as very proactive. In light of the tragedy, it is reasonable to expect Disney World to begin relocating any alligators regardless of size. However, removing and relocating alligators is a never ending job as alligators can travel miles to locate new habitat and the waterways in Florida are nearly all interconnected to facilitate drainage in the barely above sea level state.

Finally, Disney World President George A. Kalogridis released the following statement on Wednesday, June 16, 2016. “There are no words to convey the profound sorrow we feel for the family and their unimaginable loss. We are devastated and heartbroken by this tragic accident and are doing what we can to help them during this difficult time. On behalf of everyone at Disney, we offer them our deepest sympathy.”