Even though most Disney fanatics’ minds are on the more rapidly-approaching holidays in the holiday season, there’s a Disney event coming up in January that is not to be overlooked! The Disney Parks Blog has announced some details from the EPCOT International Festival of the Arts, which begins on January 14th and is “an inspiring way to celebrate the best of the visual, culinary and performing arts, all in one destination”. The festival will continue through February 21st, and will be accompanied by the ongoing celebrations for Walt Disney World Resort’s 50th anniversary!

The first event in the festival is the DISNEY ON BROADWAY Concert Series. In this series, there will be “three shows each evening headlined by Broadway stars performing beloved songs from more than 25 years of award-winning stage productions”. The Concert Series will start on December 14th, and if you’re a Disney Guest who loves an elegant Disney meal, then you can head to ArtfulEPCOT.com and choose a DISNEY ON BROADWAY Dining Package to accompany the concerts! If cuisine is your favorite form of artistic expression, and you missed (or attended, and loved) EPCOT’s Food and Wine Festival, then this EPCOT event will definitely be up your alley! In addition to the Broadway dining packages, there will be “art-inspired menus at 15 Food Studios throughout World Showcase”. Two new offerings will be Deco Delights and The Craftman’s Courtyard, and an in-depth foodie guide will be released for those in early 2022! According to journalist Ashley Carter, “Deco Delights will feature desserts inspired by Art Deco, while The Craftsman’s Courtyard will feature seafood and salads”.

You can also take a “fun food stroll” along the Wonderful Walk of Colorful Cuisine, which will feature “five sweet and savory offerings listed in the Festival Passport”. After you’ve gotten the five stamps from each treat, you will get a unique Artist Palette Cookie!

If you prefer inedible artwork, then this festival has plenty for you to enjoy, too! Over 100 Disney artists and “visiting artists” will showcase be presenting their work throughout EPCOT. Many of the artists are coming from the Disney Artist Gallery and the WonderGround Gallery, and lots of the artwork will be from ACME Archives, Thomas Kinkade Studios, Wyland Galleries, and POP Gallery. 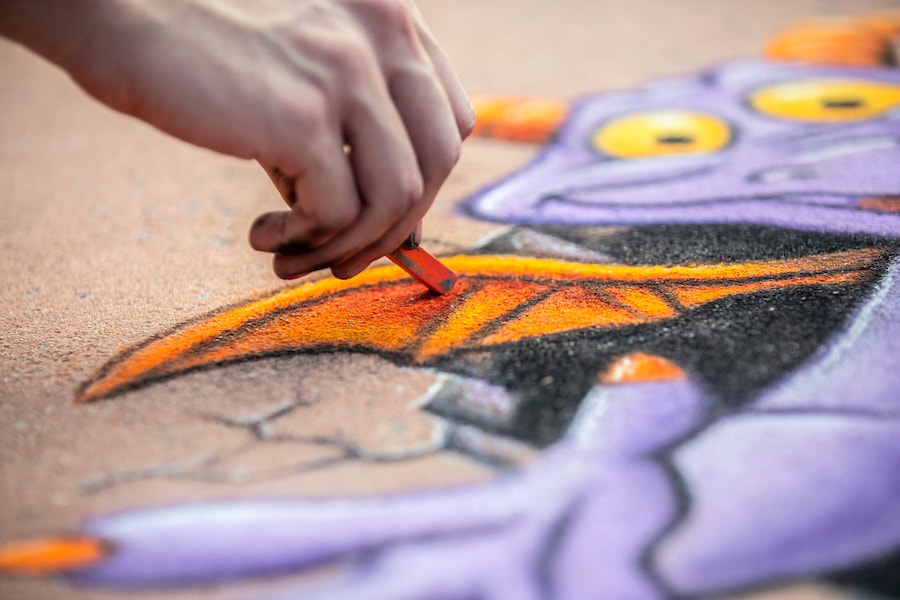 An animated character is also serving as the ‘mascot’ for 2022’s festival! Figment will be lending “an artistic touch to this year’s festival merchandise collection”. The collection will include clothing, accessories, and pins for trading.

Fans of less curated and more visceral artwork might enjoy watching chalk artists at the Chalk Art Galleries or picking up a drawing tool themselves at Animation Academy. There will also be a Kid’s Chalk Art area and A Paint by Numbers Mural that anyone can add to! History buffs will also love that Artful Photo Ops around the World Showcase will make it possible for them to literally step into “renowned paintings from centuries past”.

If you want a break from walking, you can also round out your Disney day at EPCOT by watching the Visual Art in Performance, where “an artist paints favorite Disney Characters in a matter of minutes”. Does this EPCOT Festival sound like one that you’ll enjoy?