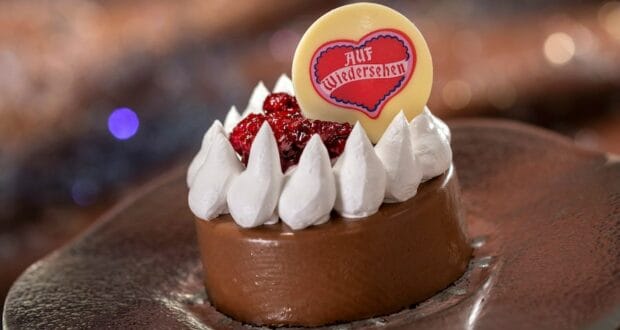 If you’re hungry for more after trying out Walt Disney World’s 50th-anniversary meals, holiday confections, and the returning favorites at these two Resort restaurants, then you’re in luck! Disney has released several more limited-edition anniversary or holiday treats. First up is the “over-the-top 50th Celebration Shake at the Beaches and Cream Soda Shop in Disney’s Yacht and Beach Club Resorts. This is “a birthday cake-flavored shake drizzled in gold glitter glaze topped with a slice of commemorative 50th celebration birthday cake”. Check it out in the image below!

Another unique treat is the “Dynamite“ Cinnamon Roll Sticks at Whispering Canyon Café in Disney’s Wilderness Lodge! According to the Disney Parks Blog, “each order has five fiery red sticks filled with cinnamon schmear sprinkled with crushed red-hot candies and a drizzle of cinnamon oil”. Bacon serves as the dynamite wick!

Next up is the adorable White Chocolate Peppermint Cream Cheese Mousse (topped “with peppermint sauce and chocolate cookie crumbles”) at the Satu’li Canteen in Disney’s Animal Kingdom Theme Park! Since this is a holiday treat, it’s only available from December 20th to 27th. This treat was a fan favorite last year, too!

The new restaurant in EPCOT’s French Pavilion, La Crêperie de Paris, was highly-anticipated when it opened–and now it’s wide open, with reservations available for breakfast, lunch, and dinner! If you want a light and crispy cuisine that differs from the heavier holiday comfort food, then head here for “savory galettes”, “sweet dessert crêpes”, and tart ciders. One standout on the menu is the Saumon Galette (which features “smoked salmon, crème fraiche, chives, and lemon”)!

Walt Disney World’s 50th anniversary, also known as The World’s Most Magical Celebration, has also been getting attention at the Main Street Bakery in the Magic Kingdom! Its menu’s current highlight is the Opening Day Celebration Cake, which is a gluten-friendly chocolate cake containing “milk chocolate mousse” and a “raspberry center”, topped by “balloon sprinkles and a chocolate piece”. There’s also a limited-edition Seven Dwarfs Specialty Cone at Storybook Treats (it’s “a cranberry vanilla soft-serve in a cone with a chocolate belt buckle and an adorable “Grumpy” chocolate face”) that’s only available through January 9th.

If a meal like the galettes at La Creperie de Paris made you yearn for more adult, sophisticated, international foods, then head to the Pinocchio Village Haus for its Black Forest Cheesecake! This dessert is only available until January 9th–and since it’s a “chocolate cheesecake topped with cherry compote, whipped cream, chocolate shavings, and a white chocolate coin inspired by the “It’s a Small World” attraction”, this will be in high demand!

Not everyone loves chocolate or comfort food during the holiday season, and if you’re in that category, you can still find some creamy but tropical delights at Disney World! The Orange Bird Holiday Citrus Swirl (which is a “DOLE Whip Orange and Lime swirl in a holiday waffle cone” with “a white chocolate Orange Bird Santa”) can be found at the Warming Hut, while Frostbite Freddie’s has a Merry Merry Melon “melon- and apple-flavored frozen rum cocktail” that will also be satisfying! These will be available from December 12th to January 7th. Are you going to try any of these treats?