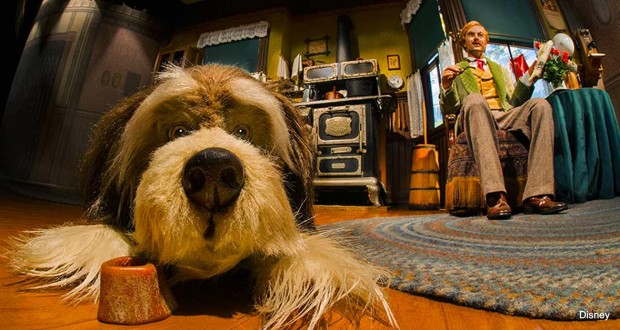 Here’s the thing: I love absolutely everything about Disney World—even the rides and shows everyone else avoids. Therefore, it should come as no surprise that I also have a few guilty pleasures when it comes to Walt Disney World. Below are a few of these wonderful little indulgences that many may not understand, but that I simply cannot get enough of.

There are a few different animatronics shows throughout Disney World. They aren’t the most thrilling attractions per se, nor are they most impressive anymore, but I love ’em anyway. Country Bears Jamboree, Carousel of Progress, and Hall of Presidents are all dated, sure, but I love the nostalgic feeling they give me, not to mention a nice air-conditioned break.

A huge number of Disney rides snap a photo of riders. I love to take full advantage of this fact by posing for each snapshot as we zoom past. It’s always fun to check out these photos at the end, which continues to make riding the coasters over and over exciting for me.

If you’ve been to Disney World before, you know there are voice recordings everywhere you go. They ask you to stand clear of doors, remind you to keep hands and feet inside your car, and even let you know when you’re about to ride the “wildest ride in the WILDerneeeeessssss!” Like many Disney veterans, I have a habit of speaking right along with these recordings, and have an absolute blast doing it. My favorite? That’s easy: the “stretching” room in the Haunted Mansion!

Mickey-shaped foods are only for kids, right? Absolutely not! Foods shaped like Mickey Mouse somehow taste better than their regular-shaped counterparts. That’s just a fact, and it means I’ll be enjoying every Mickey-shaped ice cream bar, pretzel, and waffle I can get my hands on.

There are a number of less popular rides in Disney. Many of these are simply outdated, making them less exciting, but some have been duds since day one. Nevertheless, I enjoy nearly all of these rides and always make a point of giving them some love when I visit. They include but aren’t limited to Gran Fiesta Tour, Spaceship Earth, Journey Into the Imagination with Figment, Living with the Land, People Mover, and “it’s a small world”.

Some of my favorite Disney fun isn’t inside the parks at all!  The Disney Resort Hotels are absolutely amazing, and definitely deserve some love. I adore exploring the resorts on the monorail loop during Christmas time, and have spent entire days exploring other hotels and dining in their restaurants.  If you ever have some down time during your vacation, I highly recommend giving resort-hopping a try. This is especially fun if you can do it without kids in tow.

Disney World is full of fantastic entertainment options. However, one of the best shows isn’t listed in the Times Guide or on the map—it’s people-watching. The people-watching at Disney World is top-notch. You get to see all kinds of people from all over the world. There are people speaking foreign languages, kids in adorable costumes, and folks with some spectacular Disney-themed outfits. I highly recommend settling in with an ice cream or a coffee and spending some time checking out the passersby while you rest your legs.

While currently Disney fireworks are on hold, they still make our list for when they return! I’ve seen the Disney fireworks shows countless times. Nevertheless, every time there are fireworks in a park, I have to stop and watch. This doesn’t necessarily mean I’ll head to the front to face the show, but it does mean I will pause no matter where I am and admire the beauty of the incredible shows Disney puts on.

My final guilty pleasure is not only outside of the parks, but also outside of Disney property altogether. It’s taking the magic home with me.  That’s right! Even when I’m at home I’m daydreaming (and sometimes night dreaming) about Disney World. I listen to the music, watch travel videos about Disney World, and even make mock vacation plans. Sure, it might all be a bit excessive, but that’s why they call it a guilty pleasure, right?