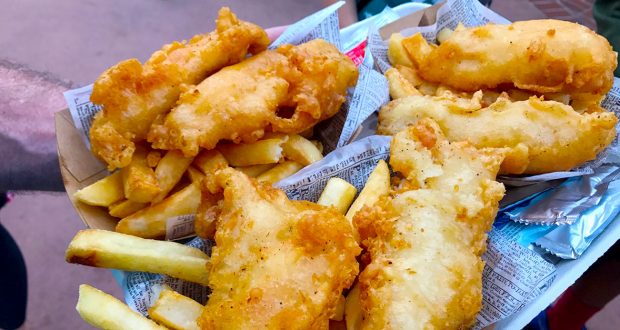 Walt Disney World’s Epcot park has so much to see and do that it can be difficult to take time out of your day to stop and eat a full meal. Luckily, there are so many quick eats to be found at Epcot that you don’t have to give up very much of your precious fun time at all. What’s more, some of these delectables are outright fantastic, so you won’t be left feeling like you missed out on some tasty food during your visit. Here are our top 6 quick eats in Epcot. Bon appétit!

As you head from Epcot’s Future World section into the World Showcase at the back, turn right and head toward the UK Pavilion, just past Canada. On the waterfront to your left you’ll encounter Yorkshire County Fish Shop, where they serve up just one entree on their menu: fish and chips. Don’t be surprised if you see a long line leading up to this window! The fact that they only serve fish and chips means they have it down to an art, and you’ll surely be craving another helping the next time you’re in Epcot.

Who doesn’t get a craving for Mexican food now and again? If you’re feeling that temptation but don’t have time to stop for a full meal, head over to the World Showcase’s Mexico Pavilion and make a quick stop at La Cantina de San Angel. Here, you can pick up an order of Empanadas con Queso, which are fried flour tortillas filled with cheese and served with Mexican slaw. These crunchy, cheesy bad boys are a great way to satisfy your craving for Mexican food — at least for a while — and they’re portable besides, so you can pick ’em up and keep on truckin’ to your next destination.

As far as we’re concerned, Les Halles Boulangerie-Patisserie in the France Pavilion is the mecca of Epcot quick eats. They’ve got pastries, sandwiches, more desserts than you can shake a stick at…and bacon-and-cheese rolls (Roule Lard & Fromage), which gets the nod in this article. This savory pinwheel is hearty enough to keep most travelers satisfied for a while, and it’s easy to carry around while you continue exploring the World Showcase.

When most people think of this stand at the front of the Japan pavilion, they usually think of kakigōri, the refreshingly fruity shaved ice treat. However, this is also a good spot to pick up an order of chilled edamame (green soybeans in the pod). Not only are these tasty, they also pack a nutritional punch!

Hungry for something a little…heftier? Check out Midnattssol Bakeri’s “Viking Dog”, a whopping one-poundall-beef hot dog topped with pulled pork, purple cabbage, spicy mayo, bacon, and fried onions. This thing is absolutely ludicrous in the best way, and you’ll probably want to share it with friends unless you’re feeling too brave for your own good. In any case, you’re not likely to be hungry again for a while.

What could be better than a big, salty pretzel to curb your appetite a while? In addition to bursting with flavor, the authentic German versions they offer at Sommerfest certainly live up to the “jumbo” in their name. Each one is served on a regular-sized entree plate and is stilltoo big for it! You’re not paying 10 bucks for nothing here. If you do have a little time to stop and eat an actual meal, we recommend the bratwurst at this same location. It’s among the best we’ve ever had—no joke.

Listing all the fantastic quick eats at Epcot would take far longer than we have time for today. Start with the “sensational 6” above and then do a little culinary exploring of your own!