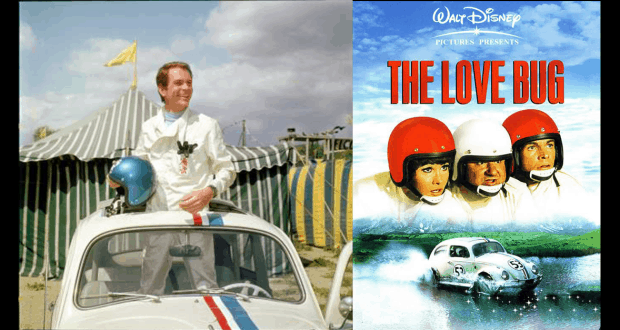 Dean Jones, star of Disney’s “Herbie the Love Bug”, passed away from Parkinson’s at the age of 84

As reported by Fox News

Dean Jones, one of Disney’s favorite young actors known for such lighthearted films as “That Darn Cat!” and “The Love Bug,” has died of Parkinson’s disease. He was 84.

Dean Carroll Jones left his hometown of Decatur, Alabama, at 15, supporting himself by picking cotton and cutting timber until he landed a job as a singer in a New Orleans nightclub. When the club closed, he returned to Decatur to finish high school.

After studying voice at Asbury University in Kentucky, he spent four years in the Navy. Soon after his release, he was signed by MGM, and it appeared for a time that he was being groomed as a possible successor to James Dean.

Jones married Mae Entwisle, a onetime Miss San Diego, in 1954, and the couple had two daughters, Carol and Deanna. He and his second wife, Lory, had a son, Michael.

Besides Lory, his wife of 42 years, and his children, Jones is survived by eight grandchildren and three great-grandchildren.

Jones’ long association with The Walt Disney Co. began after he received an unexpected call from Walt Disney himself, who praised his work on the TV show “Ensign O’Toole”

Walt Disney offer him a role in “That Darn Cat!” opposite ingénue Hayley Mills. His FBI agent Zeke Kelso follows a crime-solving cat that leads him to a pair of bank robbers.

Released in 1965, it would the first of 10 Disney films Jones would make, most of them in the supernatural vein.

“The Love Bug” (1968) was the most successful of the genre, with Jones playing a struggling race-driver who acquires a Volkswagen that wins races for him. The Bug, named Herbie, has hidden human traits, and when it feels unappreciated it disappears. Jones must rescue Herbie from the hands of his nefarious rival and issue the car an apology before it wins the big race for him.

Jones returned to the Disney studio in 1977 for one more film, “Herbie Goes to Monte Carlo.”

Over the course of his career, he’d appear in 46 films and five Broadway shows. In 1995, Jones was honored by his Disney colleagues with a spot in the Disney Legends Hall of Fame.

We will fondly remember his great smile and easy demeanor on the screen.

Photo credit:
“Dean Jones with VW” by Source. Licensed under Fair use via Wikipedia