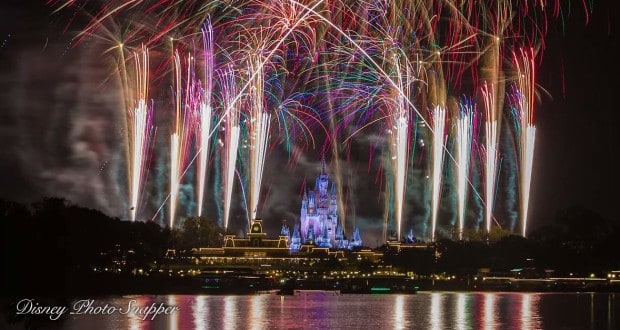 Walt Disney World is a family destination like no other, with attractions and experiences that thrill and amuse every member of the family. All four Parks and the Disney Resort Hotels reflect the philosophy and spirit of Walt Disney, with the emphasis on family entertainment. In addition to all the magic and fantasy of this magical world is the transformation that occurs every day at sunset. Walt Disney World turns into a dazzling world of bright lights covering every building, attraction, and even the trees, extremely picturesque and a joy to behold.

10. Ride the Monorial at Night—One way to experience the nighttime beauty of Walt Disney World is by riding the monorail. As the monorail makes its nightly grand circle tour around Bay Lake, the Seven Seas Lagoon, Resort Hotels, and the Magic Kingdom, the transformation from daylight to night is spectacular. All the bright and sparkling lights break through the darkness of night and give the riders on the monorail a magnificent panoramic view of this most magical place. If you take the monorail from the Magic Kingdom to Epcot, the view of Spaceship Earth and all the other attractions in all their glowing radiance is amazing and truly a sight for sore eyes.

9. Nighttime Entertainment—There are plenty of clubs and nightly activities around the Resorts and Paks of Walt Disney World, but one of the most entertaining family friendly nighttime shows is hosted by a Disney Icon, YehaaBob Jackson, a multi-talented piano player and singer who performs at the Disney Port Orleans-Riverside Resort in the River Roost Lounge, every Wednesday through Saturday evenings. Bob is also a 2013 recipient of the prestigious Disney Legends Award. He has been performing at the River Roost since May, 1997, and his show can be described as a very popular piano sing-along comedy, with lots of audience participation, including parents and their children. His bubbly performance is filled with singing, dancing and playing his piano, which also sways with the beat. It’s an all-around good time enjoyed by all who are in attendance. Bob’s showmanship is sensational and his enthusiasm contagious.

8. Jungle Cruise at Night, Magic Kingdom, Adventureland—The Jungle Cruise during the day is an entertaining boat ride through the jungles of Asia, Africa, and South America, observing all the different animal and plant species in their natural habitat. At nighttime, it is an entirely different experience. First of all, the lines are shorter, and secondly, it is cooler in the evening, which makes it quite enjoyable in the hot summer months. The boats themselves are well lit with multiple lanterns, and each highlighted scene is illuminated by large spotlights that are mounted on top of each boat. Traveling through the jungle at night is an eerie but thrilling adventure.

7. Tomorrowland at Night—Every night at sunset, Walt Disney World begins a magical conversion into a stunning, brightly lit nighttime extravaganza. Tomorrowland, especially transforms into a dazzling, luminescent world of brightly colored neon lights. One of the best ways to view Tomorrwland at night is to climb aboard the PeopleMover for a relaxing, open-air tour of the world of tomorrow. Of course, a stroll through Tomorrowland is another way to enjoy this brilliant metamorphosis. Combined with the futuristic sounds and music, it becomes a sight that will amaze and delight.

6. Special Events, Magic Kingdom—Mickey’s Not So Scary Halloween Party & Mickey’s Very Merry Christmas Party—Mickey’s Halloween Party features candy stations all over the Park, a Hocus Pocus Villain Spectacular in front of Cinderella’s Castle, a special Boo to You Halloween Parade, and a HalloWishes Parade. The Christmas Party begins with a special appearance by Elsa and Anna who perform with Olaf and Kristoff in front of Cinderella’s Castle, where Elsa with her Frozen magic changes the Castle into a glistening ice palace. The evening festivities include special Holiday music, cookies and hot cocoa, and a wonderful Once Upon A Christmastime Parade with Toy Soldiers, Gingerbread men, elves, Disney characters and, of course, Santa Claus. The evening concludes with Holiday Wishes: Celebrate the Spirit of the Season, a breathtaking fireworks display narrated by Jiminy Cricket, starring the voices of classic Disney characters, and a magical flight by Tinker Bell in the skies over the Magic Kingdom. Both of these nighttime events will please and delight anyone who takes part in them.

5. Wishes Nighttime Spectacular, Magic Kingdom—Wishes is a fireworks production like no other. Your narrators for the show are Jiminy Cricket and the blue Fairy. As they tell their stories, the fireworks begin, a few at first, but as the show progresses, they become more and more elaborate. Tinker Bell takes flight over Cinderella’s Castle, and the Disney magic lights up the skies over the Magic Kingdom. Brilliant bursts of color and blazing rockets combined with the medley of famous Disney songs and the voices of popular Disney characters makes this one of the biggest fireworks display in Magic Kingdom history.

4. Special Cruises at Walt Disney World—Wishes Fireworks Cruise (Basic and Premium), and Ferrytale Wishes, A Fireworks Dessert Cruise—For about $300, you can invite up to 8 guests on a cruise on a pontoon boat on the Seven Seas Lagoon for a spectacular view of the Magic Kingdom Wishes Fireworks Show. This delightful cruise includes bagged snacks, water, and sodas. Guests may order a private dinner to be delivered to the boat. The sounds from the fireworks show is not provided on the boat. For about $350, the amenities are the same, except you can invite up to 10 guests, and there is an audio feed of the fireworks music. The newest Cruise is the Ferrytale Wishes—A Fireworks Dessert Cruise—$99 for adults and $69 for children ages 3-9). This cruise takes place on one of Disney’s Ferryboats. You board the ferryboat from its dock at the Transportation & Ticket Center one hour before the show begins. Beverages and desserts are served while you watch the amazing fireworks show. Music is piped in through the boat’s sound system. Any one of these options would be a fantastic way to top off your visit to the Magic kingdom.

3. IllumiNations, Reflections of Earth, Epcot, World Showcase—This extraordinary fireworks show celebrates the past, present, and future of this wonderful planet we call home, as well as the human spirit. Hundreds of Disney visitors gather around the World Showcase Lagoon for this awe-inspiring production. There are three distinct themes being presented: The Earth is Born, The Triumph of Life, and Hope For The Future. Watch in amazement as flames and fireworks erupt from the lagoon. Shimmering comets of light ignite the dark skies as a radiant globe slowly glides across the water, its surface revealing the history of humanity and the achievements of our time. As more comets of light brighten the skies, the globe blossoms like a lotus flower, revealing a giant blazing torch illuminating dreams from around the world. Throughout the show, the emotionally charged music adds to the magnificence of this very popular nighttime event.

2. Fantasmic, Hollywood Studios—Whatever you do, don’t pass up a chance to experience Fantasmic at the Hollywood Hills Amphitheater in Hollywood Studios. The storyline of this dynamic production follows the antics of Mickey Mouse as the Sorcerer’s Apprentice as he attempts to bring together many Disney characters to help him defeat the Disney villains, who have come to steal the Sorcerer’s magical hat. What makes this show so exciting is the use of pyrotechnics, laser lights, one million gallons of dancing water, and a cast of 50 costumed performers singing treasured Disney tunes along with classic animation projected onto walls of water. The battle between the Disney characters and the villains ends with Mickey Mouse and his friends defeating the villains. This is thirty minutes of pure entertainment with all sorts of exhilarating surprises which will thrill and delight adults and children. It is best if you reserve this very popular attraction in advance.

1. Main Street Electrical Parade, Magic Kingdom—The Main Street Electrical Parade premiered at Walt Disney World in 1977 till 1991. It was replaced by a new parade, SpectroMagic, which ran from 1991 till 2010, at which time the Main Street Electrical Parade returned and is now under an open-ended run, which means there is no final date set to end this parade. Guests begin lining the streets along this parade’s route several hours before parade time. It is a very magical, musical nighttime parade with beautifully decorated floats covered in thousands of multi-colored twinkling lights. Each glittering float depicts a classic Disney film, including the music and characters associated with the float’s theme. One word can adequately describe this parade—electrifying! When you visit Walt Disney World, be sure to make it a point to watch this unique nighttime parade.

Walt Disney World is full of fun, entertainment, and surprises, and many special events occur at night. Day or night, Walt Disney World is a magical world, where dreams and imagination come together to amuse and delight all who visit one of the greatest amusement parks in the world.