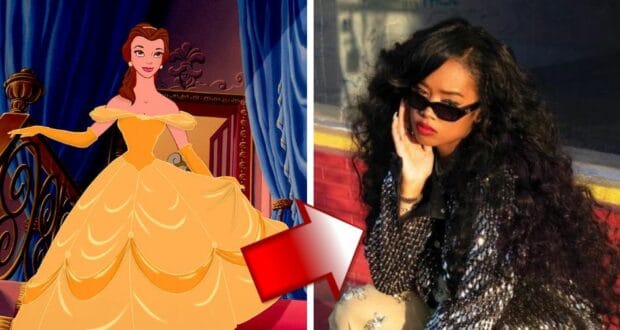 H.E.R., aka Gabriella Sarmiento Wilson, will channel Belle in a special performance.

The Grammy Award and Academy Award-winning musician known as H.E.R. has just been cast to play a live-action version of the Disney princess Belle from Beauty and the Beast.

H.E.R. is not replacing Emma Watson, however. Even though the 2017 live-action adaptation of Beauty and the Beast that starred the English Harry Potter actress and the Downton Abbey star Dan Stevens did not receive rave reviews, and many Disney princess fans criticized Emma Watson’s singing, H.E.R. is not playing Belle in the traditional sense. Instead, the singer (who is actually named Gabriella Sarmiento Wilson) is channeling Belle and portraying the Disney princess as she performs the songs from Belle’s animated Disney film in an upcoming two-hour Beauty and the Beast special. The two-hour Beauty and the Beast homage will combine content from the animated 1991 film and the 2017 adaptation in honor of the film’s 30th anniversary.

“I can’t believe I get to be a part of the ‘Beauty and the Beast’ legacy,” H.E.R. told Variety in response to the announcement. “The world will see a Black and Filipino Belle! I have always wanted to be a Disney princess, and I get to work with two wonderful directors: Hamish Hamilton and my favorite, Jon M. Chu. It is very surreal, and I couldn’t be more grateful.”

Jon M. Chu is best known for his work on Crazy Rich Asians, and H.E.R. serves as a producer for the show behind the scenes alongside Chu and Hamish Hamilton. H.E.R will perform songs in front of a live audience, although the show will not be live when it airs. Belle (voiced by Paige O’Hara) in ‘Beauty and the Beast’ in 1991. Credit: Disney

Disney fans who are hesitant about watching Beauty and the Beast: A 30th Celebration will want to give the show a try, if only for the musical performances that are bound to include some surprises. H.E.R. has won five Grammys for songs like “I Can’t Breathe” and “Fight For You,” and she is also acting in the upcoming Warner Bros. movie The Color Purple, so this entertainer will probably impress many viewers with her singing and acting skills!

“With her obvious extraordinary talent and stage presence, H.E.R. is the perfect embodiment of our Belle, and we are thrilled for audiences to see her in this celebration of creativity,” Jon M. Chu told Variety. “We were both influenced as storytellers by the original animated movie, so it’s very exciting to collaborate together to honor the artistry of that timeless classic while also inspiring a whole new generation of creators.”

Disney fans will be reminded of Moana star Auli’i Cravalho’s turn as the little mermaid Ariel in a TV performance, too (which can be found on Disney+). The new Beauty and the Beast TV special will air in December and come to Disney+ too — right after it airs on television!