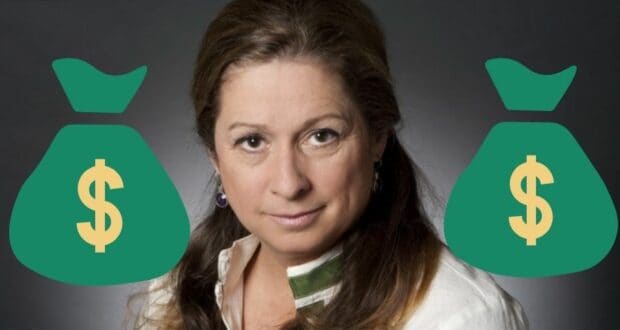 Abigail Disney, the granddaughter of Walt Disney Company co-founder Roy O. Disney, was born into a family with money. The Disney heiress (who is worth at least $125 million) has used her position as a wealthy one-percenter to not only work as a philanthropist, activist, and documentary filmmaker, but also to openly call out others with money (including the Walt Disney Company) who are ignoring “the unequal structuring of society”.

As an heiress to a Disney fortune, Abigail Disney grew up with money managers, “They were really lovely, wonderful, nice people who had known me since I was a child… and they taught me some things that it took me a long time to break open and really unpack. Nobody said this out loud—this was just implied—but if you end your life without more than you started with, then you’ve somehow failed. And beyond that, your children should be better off than you were,” Disney recently explained. She has specifically avoided that kind of goal, however. “I think that’s an appropriate thing, maybe in the middle class or the working class,” Disney said. “But I started already with more than I need. Why would I want more or need more?”

“I could be a billionaire if I wanted to. I’ve said no to more money for much of my adult life,” she added. “I think of it as a long, slow ceremonial suicide that I’m committing, by being a terrible businesswoman and giving a lot away. But I don’t understand why that’s not one of the options.”

“I just don’t think you can move about in the world, have your eyes wide open and feel OK about the way things are arranged right now,” she continued, referencing her efforts to shift fellow wealthy people’s thinking. “I think it’s necessary to start calling each other out on our own team. The one thing you never do is say, ‘But, you know, I think that’s wrong.’ It’s very frowned on, it’s ‘un-collegial’ and ‘overly emotional and immature’, and all those things. But it seems to me that what we’re doing now is not working very well. Quite the opposite. And I didn’t see any options left but to kind of turn on my class.”

Abigail Disney has teamed up with some other extremely wealthy individuals to fight for higher taxation of “super-wealthy” people. She also wrote an opinion piece for The Atlantic that criticized “dynastic wealth”.

“Those of us in the richest 1/10th of the richest one percent should be proud to pay a bit more of our fortune forward to America’s future,” Disney and her collaborators apparently wrote in a letter to 2020 presidential candidates. “We’ll be fine—taking on this tax is the least we can do to strengthen the country we love.”

Abigail Disney has not been shy about criticizing big names including Elon Musk, Jeff Bezos, and Warren Buffett. She also has not been shy about calling out the Walt Disney Company itself, which was founded by her grandfather, for the “naked indecency” of its CEO’s salary (at the time of this criticism, the Walt Disney CEO was Robert Iger;  CEO Bob Iger made over $65 million in 2018).

Being a traitor to my class is my proudest accomplishment https://t.co/AVOiKZABo1

Abigail Disney has also created a documentary about income disparity called The American Dream and Other Fairy Tales, which recently premiered and reportedly “takes direct aim at the vast disparity between what Disney pays C-suite executives vs. low-level employees at its theme parks, the workers Disney refers to as ‘cast members’”.

Abigail Disney’s approach and her The American Dream and Other Fairy Tales documentary have alienated her from other members of the Disney family, as well as plenty of influential wealthy people. “If I were still invited to those places [where rich people congregate], which I don’t think I will be, I would be only too happy to say the uncomfortable things because what on earth do rich people need to be comfortable for?” Disney stated. “I think they’re defined by their comforts. And, so, they need to be made to confront some very unpleasant realities about their wealth and the consequences of the inequality.”

Disney has already made her stance clear, but just to make it more evident, she Tweeted in the Tweet above that “being a traitor to my class is my proudest accomplishment.”