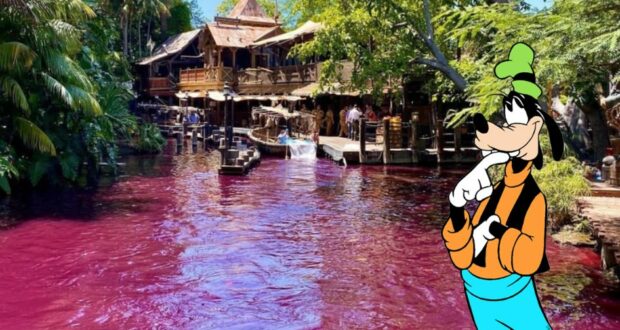 One of Walt Disney World Resort and Disneyland Resort’s most iconic attractions is the fan-favorite Jungle Cruise ride. But, to the Guests’ surprise, on a recent visit to Disney, the Jungle Cruise river was bright pink!

Disney recently reimagined several scenes for the Jungle Cruise attraction at Disney Parks, including Magic Kingdom Park and Disneyland Park. Like the former reimagining of the Pirates of the Caribbean attraction’s bride auction scene and the upcoming Splash Mountain removal of Song of the South themes, Disney is working to “reflect and value the diversity of the world around us.”

But, a bright pink river? Well, this is different!

Replies were quick to come with some hilarious perspectives on why the river was pink:

@sincerelyivy replies, “oh no. the piranhas got the boat.”

@RobotBiden adds, “Moses touched the water of the Jungle Cruise to send a message from God to Bob Chapek… bring back the Magical Express”:

RELATED: Jungle Cruise Review: A Wonderful Journey Through the Amazon

Pink Panther would be a fan! @E_D_L_I comments, “Rebranding Jungle Cruise?” with a gif of Pink Panther:

@xDivineChaos add a gif of Flora from Sleeping Beauty turning Princess Aurora’s dress pink with, “I think I know what happened.”

@SmagnaferousArt mentioned the infamous Trader Sam with, “Trader Sam had to… purge some of his inventory…”

RELATED: The Jungle Cruise Gets a Second Film with Dwayne Johnson and Emily Blunt

But, @Its_The_Nugget that likely has the most reasonable cause for the Jungle Cruise water being pink by replying, “My other theory is that they used potassium permanganate to clean the water. From research it seems it is not harmful to be around.”

We suspect it was a simple Jungle Cruise water cleaning captured on camera. It would make sense for Disney to do this after hours, but possibly someone dropping by early in the day caught the look of the river and snapped photos before the pink cleared up.

A pink Jungle Cruise amazon river is an interesting sight to see. We’re curious what kind of jokes a Skipper Cast Member would have in this scenario!