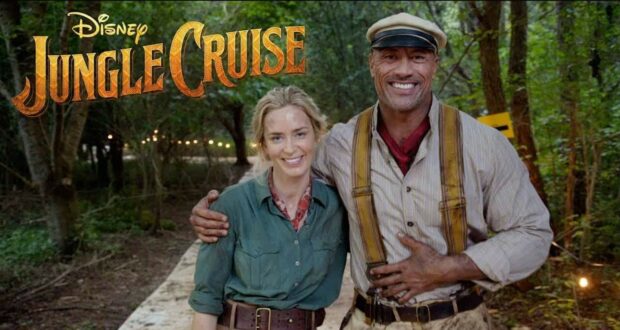 Jungle Cruise Review: A Wonderful Journey Through the Amazon

The summer movie season continued the schedule of releases this weekend with the arrival of “Jungle Cruise” in theatres, as well as on Disney+ through the premier access program.  Regardless of the venue that you choose to view the movie in, it was another amazing addition to the Disney film archive for families to enjoy in the years that come.

Following in the footsteps of the “Pirates of the Caribbean” franchise, “Jungle Cruise” had the same task of finding a way to translate a beloved attraction into an adventure that will please lifelong fans, adults, and kids alike.  The film quickly pays homage to the attraction we all know and love (quick aside: anyone looking for more Jungle Cruise info should check out “Behind the Attraction on Disney+ for the story behind the attraction, as well as vintage footage of the attraction being built for the opening of Disneyland).  Dwayne “The Rock” Johnson aptly tackles the role of skipper as Frank.  On a tour, we see him delivering classic quips with ease to the detriment of the guests, as well as featuring everyone’s favorite part of the attraction, the backside of water.  Classicists will also enjoy the mentions to Dr. Albert Falls and his expedition into the jungle.

Frank is joined by brother and sister, Dr. Lily and Macgregor Houghton, portrayed by the marvelous Emily Blunt and Jack Whitehall as they seek the rare Tears of the Moon flower petals to be able to use in medical research.  Joining in the race for the elusive flower is Prince Joachim who is convinced that the rare flower is the key to Germany being able to win the Great War.  The trio is pursued by Prince Joachim as he navigates the Amazon in his submarine, as well as unleashes cursed explorers who had first sought out the flower back in the sixteenth century.

Viewers can expect being wowed by stunning visuals throughout the movie as they are transported to exotic locales in Brazil and along the Amazon River.  The boat encounters flowing rapids, colossal waterfalls, and wildlife along their journey.  During their journey, the trio is captured by a local indigenous tribe lead by the infamous Trader Sam, who in this iteration is female, but also conspires with Captain Frank on the voyages he takes up and down the river.

The end of the film quickly takes on a distinct “The Goonies” feeling as the trio figures out the location of the rare flower and races to get their before Prince Joachim and his henchman leading to a final standoff between the characters and the resolution of the story that we don’t want to ruin here, but, suffice it to say that “Jungle Cruise” lives up to the requirements of modern Disney movies where resolution is obtained, but also leaves the story in a place that a sequel can be easily released if the box office demand supports it.

Not truly essential to the plot of the movie is a wonderful performance by Paul Giamatti as Skipper Frank’s main competition in jungle cruises, Nilo.  We certainly hope that if there is a sequel or spinoff that Nilo can be a part of that.

The movie captured this writer’s attention for the length of the two hour plus runtime and it offers enough humor, action, and adventure for every member of the family, so it would be a great choice for a family movie night-in or a night out at the theatre.  The only complaint I hold in relation to modern Disney movies is how it focuses the viewer to be aware of and consider how the moviescapes may be translated to any in-park experiences.

Most fans are aware of the changes that are currently underway at the Jungle Cruise attractions at the parks with the removal of Trader Sam, as well as the update to some of the show scenes throughout the attraction.  One locale in the film seems easily adaptable to an existing attraction in both Disneyland and Walt Disney World – we are waiting to see if any Imagineering updates are forthcoming on this or not.

Have you made plans to see “Jungle Cruise” yet?  Did you decide to venture out to a theatre or did the family view from the comfort of the couch at home?  And would you want to see a sequel to the movie?