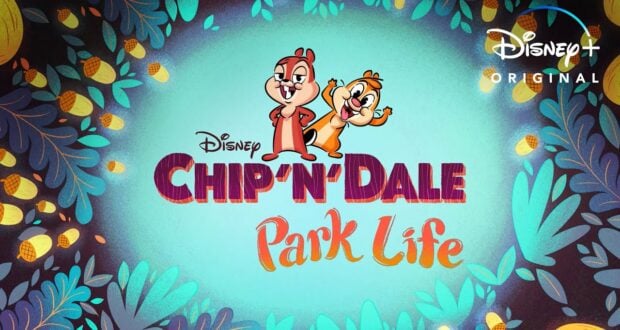 Another in the long line of Disney+ releases dropped early this morning along with the newest episode of Monsters at Work. This new animated show features two beloved characters – Chip and Dale as we follow their comic misadventures in the park that they call home. The inaugural episode was only 22 minutes in length, so it does not require a substantial time commitment from the viewer. Moreover, this episode was broken down into three shorts (about 7 minutes a piece), so you can easily watch as much or as little as you care to in a sitting.

The show as a whole has many positives and a few negatives.  To begin with, we did not enjoy that the show lacks a kind of cohesive theme (other than our two characters calling this park home).  We hesitate to refer to this as a show since it appears off of the first episode that each episode will be a collection of shorts or featurettes.  Since there is no overarching plot narrative, the show deprives us of any dialogue between the characters, but the animators do a phenomenal job in conveying tone through the character’s faces and basic sounds.

Featured prominently in this first episode is the animation style that is used for the Mickey Mouse shorts, as well as displayed in one of the newest attractions at Disney World, Mickey and Minnie’s Runaway Railway.  This style does put a focus on the movement of the characters and any objects they are interacting with and detracts from the backgrounds becoming an art piece.  During the first short, Chip ‘n Dale are struggling to find enough food for them and happen upon a food cart in the park that serves nuts.  However, they discovery that Pluto and his puppies also get food from this cart, so a back and forth ensues over the ownership and division of the nuts.

The second short finds Chip ‘n Dale stumbling upon a gaggle of babies in the park and them becoming involved misadventures with them.  The final short demonstrates both the value of friendship, but also the perils of friendship.  Chip and Dale get accidentally knitted together by their tails and are left to figure out how to get free from one another as they quickly discover that being attached at the tail is not all that it is cracked up to be.

The animators do a fabulous job of including classic cartoon gags, as well as nods to the previous Disney animated work, so if you are familiar with the history of the animation studio, you can find some enjoyable moments.

We understand with this release that Disney+ is truly meant for all members of the family.  After the slew of Marvel releases, as well as the Star Wars content, we were conditioned for most content to be geared towards an older audience, but this cartoon is clearly meant for small children where an extended plot or dialogue is not needed, so if you have a toddler or a child that is desperate for some new Disney content, this will be a fabulous option.  Older kids and adults may not find a lot of enjoy here, but the cartoon is another solid entry to the slate of entertainment available on Disney+.