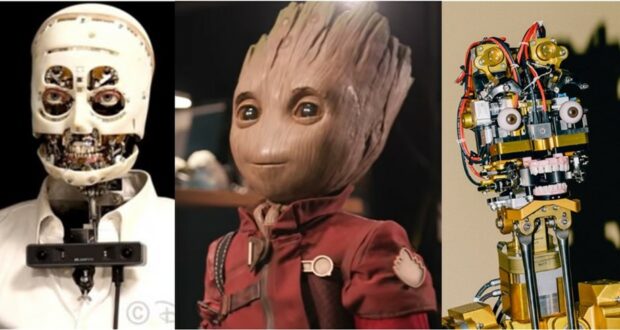 Disney’s animatronics are what make the many classic Disney attractions memorable and unique. What Disney fan doesn’t love the chance to sing along with the pirates on the Pirates of the Caribbean attraction? The grim grinning ghosts come out to socialize in the iconic graveyard scene in the Haunted Mansion. Even the nostalgia of the animatronic family in Walt Disney’s Carousel of Progress makes us feel at home. But, “there’s a great, big, beautiful tomorrow shining at the end of every day”, right? With that said, Disney Imagineers are hard at work looking to step up their robot game for the great big beautiful tomorrow!

Disney working on new robots is no secret. Not too long ago we shared the news that Disney Imagineers have been working on a Groot robot (AKA Project Kiwi). This isn’t your ordinary animatronic, however. Groot moves and interacts like he’s real! Disney has also been working on new technology that allows for realistic and interactive humanoid robot facial interactions. Creepy to gaze into the eyes of a robot? Maybe a little – but also VERY impressive! Disney has even invested in the future Disney Imagineers out there with their “FIRST” (For Inspiration and Recognition of Science and Technology) youth robotics.

Even though robots have been part of Disney theme parks since the 1960s, Disney knows they need to get ready for the next generation of Disney fans that are looking for the next best thing to be impressed by. Will the 1960’s robots do the trick?

New York Times’ reporter Brooke Barnes shares, “There are animatronics at Disney World that have been doing the same herky-jerky thing on loop since Richard Nixon was president. In the meantime, the world’s children have become technophiles, raised on apps (three million in the Google store), the Roblox online gaming universe, and augmented reality Snapchat filters. Cars are driving themselves, and SpaceX rockets are autonomously landing on drone ships.”

“We think a lot about relevancy,” Josh D’Amaro, chairman of Disney Parks, Experiences and Products, said in April during a virtual event to promote the opening of an interactive Spider-Man ride and immersive “land” dedicated to Marvel’s Avengers. “We have an obligation to our fans, to our Guests, to continue to evolve, to continue to create experiences that look new and different and pull them in. To make sure the experience is fresh and relevant.” “And all of that is a risk,” Mr. D’Amaro acknowledged. “There is a legacy here. People like the way things are. But we’re going to keep pushing, keep making it better.”

Have no fear as of right now the 6,000 animatronics used at Disney Parks worldwide are staying put. Disney’s Imagineers are looking to take animatronics to the next level – possibly outside of the attractions. “We want to create incredible experiences outside of a show box,” said Leslie Evans, a senior Imagineering executive, referring to ride buildings. “To me, that’s going to be next level. These aren’t just parks. They are inhabited places.”

So, what’s the next step? As Disney Imagineers work behind the scenes they have shared Groot (AKA Project Kiwi) will “next advance to the “playtest” stage — a short, low-profile dry run at a theme Park to gather Guest feedback. Disney declined to say when or where.” Here’s a Project Kiwi video below:

Check out New York Times full write-up for all the Disney robot details they encountered during a recent visit to a warehouse on a dead-end street in Glendale, a Los Angeles suburb.