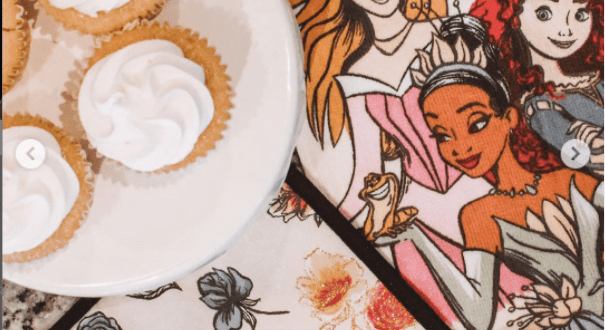 Cooking, baking, and eating are all a big part of the holiday season, and Disney is always in on the fun! As part of the ‘Twelve Days of Disney Princess’ sweepstakes, the Instagram account ‘Disney Princess Style‘ has been partnering up with digital creators to create Disney-princess-themed gift guides for twelve days in a row.  Day six of the sweepstakes featured blogger and Youtuber @briannatraynor, who was also featured for the Disney princess party-hosting gift guide earlier in the event.

If you want some overt Disney princess decor for your kitchen or for a loved one’s kitchen, the tea towel set that Brianna mentioned might be a perfect choice!  These Princess Castle Kitchen towels are from Boxlunch, and they include the following Disney princesses: Cinderella, Mulan, Belle, Merida, Tiana, Aurora, Jasmine, and Ariel! There’s also matching oven mitts! If you’re going to be baking with Disney princess equipment, you’ll want some Disney princess recipes–and as usual, Disney has it covered! “Disney Princess Baking: Royal Treats Inspired by Your Favorite Princesses has over 60 “royal treats” inspired by both the classic Disney princesses and the more modern Disney heroines. The recipes include mouthwatering treats like Aurora Black Forest Cake, Kakamora Coconut and Mango Cake, Mulan’s Great Stone Dragon Buns, Jasmine Pistachio Honey Baklava, Merida Bear Claws, Cinderella Pumpkin Carriage Cheesecake, and a Rapunzel Peach Dutch Baby. Even Tiana’s famous beignets are included! If you want to make meals instead of desserts, check out the Disney Princess cookbook too! 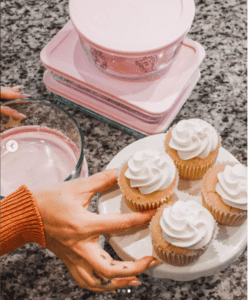 After you’ve done all of your baking, you’ll need to store the leftovers (if there are any). The Disney-princess-themed Pyrex storage set from Amazon was the chosen storage method by Disney Princess Style and Brianna! These glass storage containers feature delicate princess detailing and sayings like “life is a fairytale” and “be our guest”.

Do any of these Disney princess baking tools catch your eye?