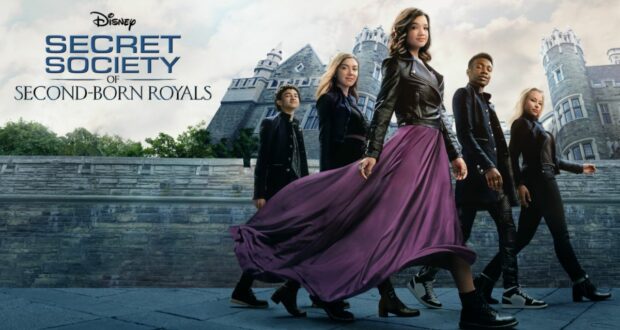 As there has finally been a slowing of the original television content being released by Disney+, we have had an opportunity to check out some of the original movies that have been released recently.  This week we watched “Secret Society of Second-Born Royals” which was released back in September 2020.  But, with the constant stream of new content, this one may have gone unnoticed by you in your feed.  But, if you find yourself with some extra time, this might be one for you to check out.

As the name of the movie suggests, a secret society exists whose membership are those second-born royals that are in-artfully described as a “spare.”  The story centers around Sam, a second-born princess who has decidedly anti-monarchist tendencies in the days and weeks leading up to her sister’s coronation as queen.  The movie introduces us to her staging a protest against the monarchy and advocating for its abolition.

Quickly we see that Sam is being treated as the black sheep of her family and she is shipped off to what is described as camp, but she quickly discovers is a training program for the secret society.  Through her training we are also introduced to four other second-borns who are members of her class.  During their education, each second-born discovers that they have a unique super power that can be harnessed to be able to assist on their missions to save the world.

Sam is endowed with the power of super sensory perception — sight, sound, etc.  Others in her class possess powerful tools of persuasion, the ability to go invisible, an ability to control insects, and the ability to take another’s power temporarily.  True to form, the viewer is treated to a training montage where our heroes are put through the paces and learn how to develop and properly use their powers for good all while being trained and tested for missions.

We are introduced to the villain who has a familial connection to Sam and are left to try and determine his motivations.  The movie moves towards a predictable, but still entertaining conclusion with all of the team members learning that they need to work together to be able to succeed, but also have to overcome a double-cross from one of their own.  The movie ends with Sam reconciling with her sister, who is now the queen, who shares with her that there is much more that binds them than separates them before the door is left open for a sequel if fans clamor for one, but we feel that this entry is all that is needed.

Even though the plot does feel predictable, the movie was still entertaining.  There are some mild fight scenes, so this might not be a great family movie night choice if you have small children, but school-age children are sure to enjoy picturing themselves going to a boarding school and harnessing their super powers; parents will also enjoy the fast-moving plot and the message of the film.

Were you one of the first to check out the Secret Society of Second-Born Royals or is it still languishing on your watchlist?  Do you think you’d pop some popcorn and check this one out?  If you’ve already seen it, what were your thoughts and what do you wish your superpower would be?