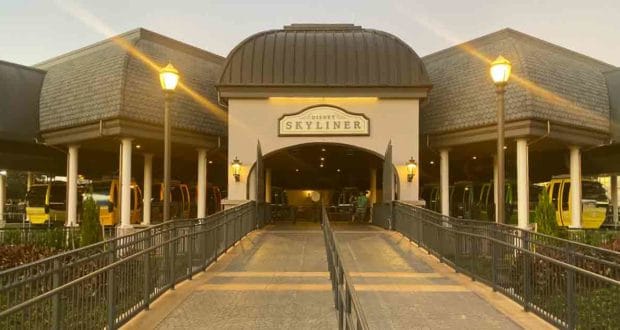 It was reported that guests were stuck in the Skyliner gondolas for over 3 hours.

Not a fun experience on the new skyliner. @WaltDisneyWorld @WESH pic.twitter.com/fwuXjlN9wg

Many of the stranded guests took the opportunity to crack open the emergency kit, located under the bench. The kit contains water, waste bags, a whistle, ice packs, glow sticks, and a notepad and pencil.

the #disneyskyliner is broken, carts are crashed, alot of people are stuck its been at least an hour. #Disney #DisneyWorld pic.twitter.com/kIHk6Ypb7Y— Thanos yes (@galxty) October 6, 2019

Been stuck on the #skyliner #disneyskyliner @DisneyParks @DisneyStudios for over 3 hours, hovering over traffic with a disabled mother, waiting on when the fire trucks will get here.. pic.twitter.com/DMOx0VUM5R— RecoTheFolf (@RecoTheFolf) October 6, 2019

There is a new transportation system arriving at Walt Disney World in the Fall.  It’s the all new Disney Skyliner Gondola System, and I am so anxious to ride in one of these beautifully themed gondolas for an awesome bird’s eye view of Walt Disney World.  I remember riding the Skyway ride at Disneyland in California and later at Walt Disney World.  They were known affectionately as the “Buckets”, because that is what they looked like.  They were open air and floated above the Magic Kingdom giving us a view of the rides and the people below us.  The Skyway ride in Disneyland was permanently closed in 1994 and closed forever at Disney World in 1999.  Now, twenty years later, Disney World will be introducing this new transportation system reminiscent of the ever popular “Skyway” ride of the past.  To say “I can’t wait to experience this new gondola system” is an understatement.  Here are some facts about this remarkable new addition to Walt Disney World.

The interior and exterior of the new gondolas have the Disney flare for making sure every guest is pleased with this new transportation system.  The special gondolas will feature two comfortable wooden benches and can hold up to 10 guests and will also accommodate wheel chairs.

The cabin windows are built to reflect the harsh Florida sunlight, while mesh screens are present to provide steady airflow.  Famous Disney characters from animated and live action Disney films will be displayed on select Disney Skyliner cabins giving the appearance that the characters are on board with the guests. 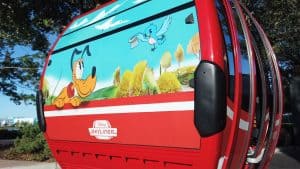 Loading and exiting the Disney Skyliner Gondolas will be a breeze, as this system is comparable to the omnimover system used in such rides as the Peoplemoverin Fantasyland the Haunted Mansionin Liberty Square, and Spaceship Earthin Epcot’s Future World, where the vehicles are constantly moving.  The gondolas will have a cruising speed of 11mph, but will slow down to 1mph when arriving at a station, and Cast Members can pause or slow down the gondolas to give guests as much boarding or exiting time as needed.

At certain points in the trip, the gondolas will be as low to the ground as 15 feet to a height of 60 feet.  It looks as though you could reach out and touch the waters of Hourglass Lake near the Pop Century/Art of Animation Resorts, as your gondola glides a mere 15 feet above the water, and at another point in your trip you are 60 feet above the ground where you will get spectacular views of Walt Disney World Resorts and theme parks.

Disney’s Pop Century and Art of Animation Resorts—These two Disney Resorts will share a station and the gondolas will travel over Hourglass Lake, and guests will get a magical view of their gondola’s reflection in the water.

Disney’s Caribbean Beach Resort—This station is considered the hub.  Here guests can stay on board or exit and transfer to another gondola ride for a trip to Disney’s Riviera Resort, Epcot, or Hollywood Studios

Hollywood Studios—Catch a ride back to Caribbean Beach hub.

Epcot—Catch a ride to Riviera Resort, then back to Caribbean Beach hub.

**There will be newly trained Skyliner Gondola System Cast Members at every station to help guests understand how to navigate this new system and guide them to their destination**. 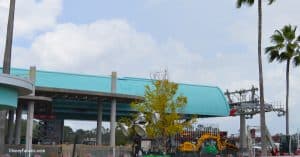 1. This new system will offer another transportation option for guests and will alleviate long wait times for bus, boat, or monorail transport.

2. For younger guests, this new gondola system will seem more like a ride than simply a mode of transportation, and for adults, it will be a relaxing way to enjoy the spectacular bird’s eye view of Walt Disney World while traveling to a Disney Resort or Disney Theme Park.

3. It’s Free!—Just like all the other transportation choices at Walt Disney World, the Disney Skyliner Gondola System will not cost you anything.  Just climb aboard for a delightful trip across the “most magical place on earth”.

Just like the bus and monorail systems, you will quickly learn how to access this newest mode of transportation, which like the “buckets” of yesteryear, will not even seem like transportation, but more like another Disney attraction to be enjoyed over and over again.  Walt Disney World will soon be celebrating its 50th“Golden Anniversary”, and there are so many exciting new adventures coming soon. A “whole new world” imagined and created by Disney is headed our way, and I and my family can’t wait to experience every part of it!