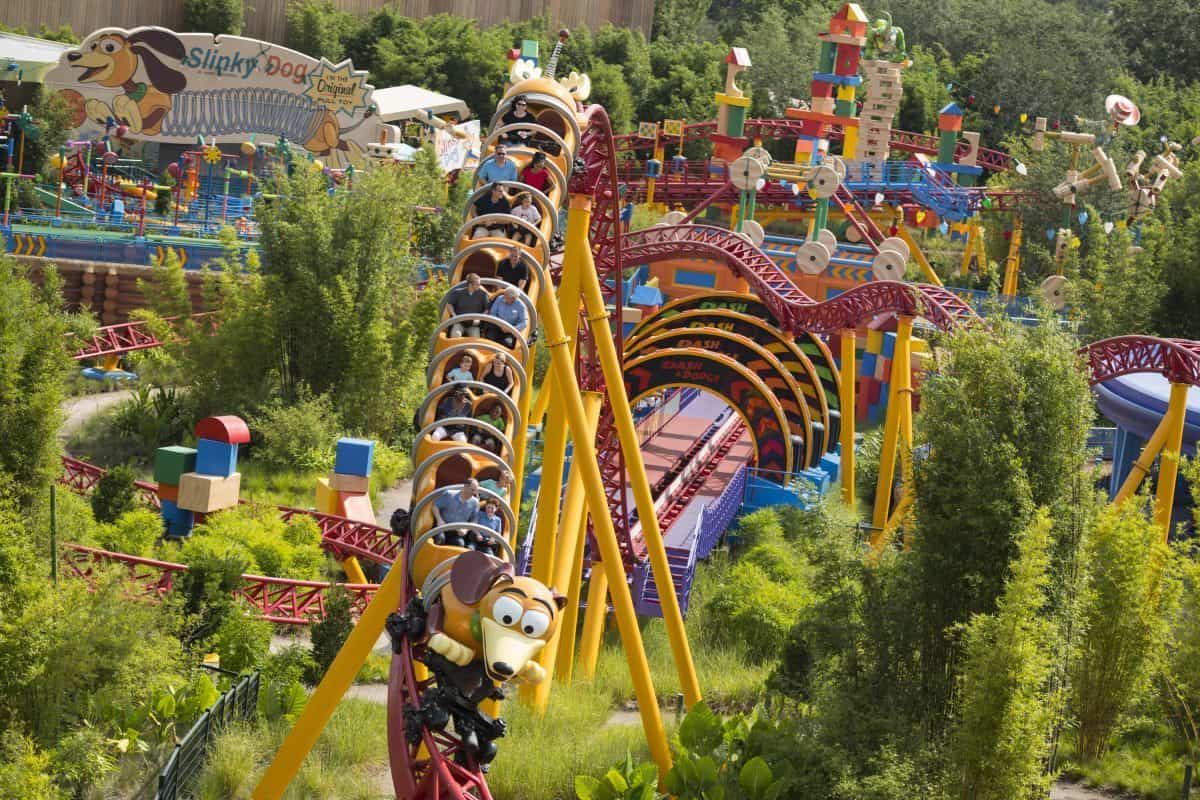 From his Dash & Dodge Mega Coaster Kit, Andy has assembled his roller coaster for maximum family fun. But instead of just using the roller coaster vehicle that came with the kit, Andy has put his Slinky Dog on the track. The result is a family-friendly thrill ride around the backyard that includes two launches. Tracks and supports in bright colors of red, orange, yellow and blue were snapped together according to Andy’s hand-drawn plans. Rex and Jessie helped by stringing lights above Andy’s stacked Jenga game pieces. To complete his creation, Andy picked everyone’s favorite floppy-eared dachshund with a stretching coil body – Slinky Dog – and dropped it onto the coaster track.

Slinky Dog Dash is inspired by the delightful pooch spinoff of Slinky, the classic 1940s American toy. Riders of all ages delight as Slinky Dog bends and twists his coils around curves, over hills and down drops in the Slinky-est coaster ever. In each 18-passenger coaster train, riders zip around and above Toy Story Land, catching great vistas of all the new land has to offer. In a first for a Disney coaster, Slinky Dog Dash features a second launch at its midpoint as riders experience cool sound effects and spinning lights, darting through a series of rings on their way to the attraction’s finale featuring Wheezy, the squeaky penguin from the Toy Story films.

Brace yourself for out-of-this-world thrills, because the Aliens have powered up their flying saucers! Alien Swirling Saucers immerses guests in the playful world of Andy’s imagination. This galactic space toy is designed as a playset Andy won at the Pizza Planet restaurant. The adorable little green Aliens from Pixar Animation Studios’ Toy Story swirl about in toy rocket ships with guests in tow, while “The Claw” hangs overhead. Two sets of 11 saucer/rocket-ship pairings spin guests through a multi-colored galaxy to a raucous, energetic musical beat.

While Andy’s away, the toys will play! Toy Story Mania! – one of the most popular attractions at Disney’s Hollywood Studios – receives a colorful all-new entrance. Evoking the fun in store, the entrance is actually the box Andy’s Toy Story Mania! game came in. Recently updated with a third track, the attraction allows even more guests to experience the carnival playset action, using virtual objects from baseballs to cream pies to hit targets in a variety of whimsical, fast-paced scenarios. To the highest scorer go the bragging rights!