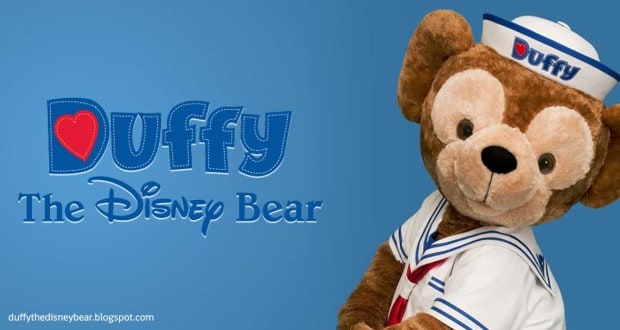 Duffy the Disney Bear is being retired at Walt Disney World Resort and other Disney properties. It seems that no matter how earnestly Disney tried to make Duffy part of the Disney character pantheon, he never quite gained enough of a fan base to warrant keeping the fuzzy little guy around. Additionally, sales of the plush toy and his character were less than expected since his debut in 2010.

Not acquainted with the Duffy’s story? Here it is from the DisneyParksMerchandise.com:
“One day, Mickey Mouse was getting ready to set sail on a long sea voyage. Minnie Mouse made him a special teddy bear to take with him so he would never be lonely. Minnie presented her hand sewn bear to Mickey in a duffel bag. Mickey loved the bear and named him Duffy.

As Mickey and Duffy sailed on their journey, they visited all sorts of exciting places and made new friends along the way. At the end of their travels, they sailed back home for a wonderful reunion with Minnie.

Mickey and Duffy shared their magical memories and photos with Minnie, who was thrilled that Duffy was such a great friend and companion for Mickey.”

Duffy will meet guests for the last time at Epcot on October 3rd, 2015 after which time, his meet-and-greet space will be a new home to Daisy Duck. So hold on to your Duffy plus toys, keychains, or other souvenirs. Who knows, they may be worth quite a bit of money to collectors in years to come. Share your thoughts on this decision by Disney. Are you saddened by the announcement or ambivalent?