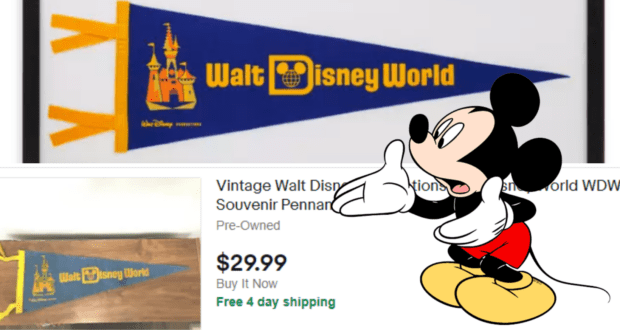 eBay is often the subject of controversy when it comes to picking up Disney parks merchandise, but today it seems the online auction site might actually be the more affordable option over Disney’s official site…

While browsing shopDisney, we came across this replica pennant inspired by a design sold at Walt Disney World parks during the 1970s. The pennant looks to be of very high quality, and it comes all framed and ready to display. Since it is a replica though, we decided to take a quick look over on eBay to see if anyone happened to be selling the original version of the pennant.

As it turns out, original versions of the pennant (albeit in less than mint condition) are going for only a fraction of the price of Disney’s official listing for the framed replica pennant. We found original 1970s Walt Disney World pennants (the same ones that inspired the new replicas) priced at about $10-30, while the replica on shopDisney runs $199.

While $199 is a steep price point for something that isn’t original when the original does still exist in some capacity, we can see an argument for purchasing either one- We just wanted to let you know that if you’d prefer the original version, it looks like they are out there to be found online!

The replica pennant is a unique piece of Disney history in itself as it is a special item made just for the 50th anniversary of the Walt Disney World Resort, and specifically to celebrate the anniversary of the Magic Kingdom opening. And, if the pennant being brand new and already framed is important to you, you may find some value in purchasing the replica over a Disney park original that will take some work to be display-ready. 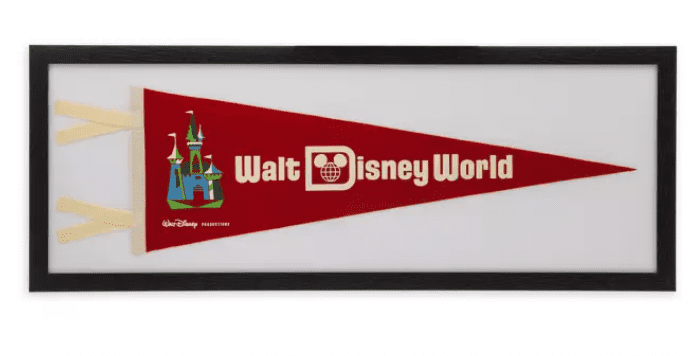 The replica version is part of the Walt Disney World Vault collection which features different styles of merchandise from years past that were originally sold in the parks and resorts. Some of the theme park souvenirs in the collection is available online through shopDisney while other pieces are only available to purchase in person from select locations at Walt Disney World.

There are a lot of great pieces in the Vault collection, but if you would be more interested in original vintage merchandise, it never hurts to see what you can find on eBay!