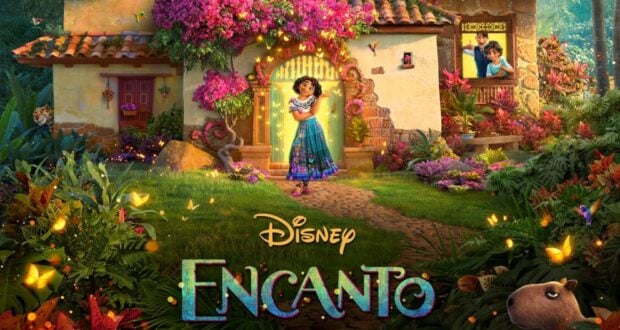 Trailer Review: Encanto Has A Magical Premise And Plenty Of Promise

Ever since Disney movies like Moana and Coco came out, Walt Disney Studio audiences have been hoping for some more vibrantly-animated adventure films. Now, another one is coming in November, and Disney has released the teaser trailer for Encanto (Spanish for enchantment, spell, charm, or love)!

This November, find your magic. 🕯✨🦋 Watch the brand-new trailer for Disney’s #Encanto, coming to theaters this Thanksgiving. pic.twitter.com/AFMwUNBEFY

In this movie, a Colombian family has been blessed with a magical house and magical abiltiies after using a magical candle many generations ago. One boy in the family can talk to animals; one woman is a healer; one girl has super strength; another girl is blessed with perfection in everything that she does…and everyone else in the family has special powers too! Except for Mirabel, one of the middle children. This young woman has no magical gifts that are unique to her; all she has is the ability to communicate and command the festive house, just like the rest of her relatives. From the trailer, we can see that the house clearly has personality, which makes for some comical moments, but Mirabel’s existential crisis continues as she sees the rest of her family’s special abilities grow.

Then, the magic begins to falter. The house starts to crumble, and the extraordinary family starts losing their magical gifts. This sends Mirabel off on a quest to “save the magic” on both counts! With the help of her family and Colombian animals, this sardonic and spunky heroine heads off to find the magic’s secrets and repair whatever damage has been done. 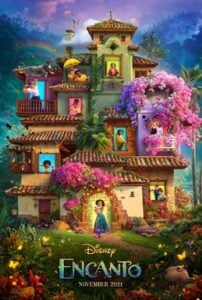 The film looks fun and exciting; we see glimpses of everything from supernatural combat to literal cliffhangers to fantastical jungles in the Encanto trailer , not to mention the inner workings of the incredible house and lots of comedy from the magical family! The Disney animation is just as visually stunning as Moana or Coco (and the music is written by Disney favorite Lin-Manuel Miranda, while Charise Castro Smith takes a turn as co-director), and with its combination of action, magic, whimsy, humor, and heart, Disney’s Encanto looks like a real crowd-pleaser! Will it be on Disney Plus ? We hope so! And spoiler alert: because “encanto” can mean either a fantastical enchantment OR love, could it be that Mirabel’s power ends up being…love? Perhaps her love for her family and her immense pride in them is what saves them all!