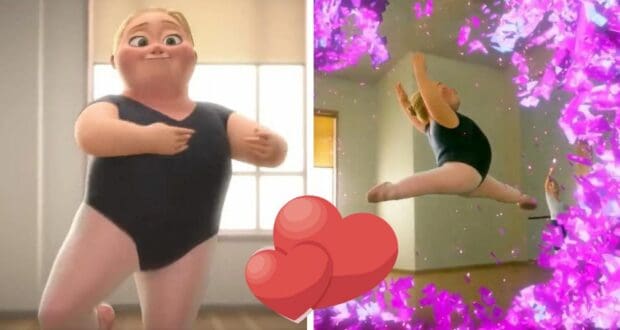 As the rise of social media increases people’s capacity for scrutiny and criticism, Disney has responded by sharing body-positive and inspiring content for Disney+ subscribers and viewers. Not everything released on Disney+ has been a big hit — or even a medium-sized hit — but the new Disney short Reflect has struck a chord with many previously-disillusioned Disney fans.

Reflect was quietly released on Disney+ as the seventh episode in the Short Circuit series on the streaming platform, and the animated short focuses on a ballet dancer’s shift from harsh self-criticism and self-consciousness to confidence and gratitude for her body’s capabilities. The short may have been small, but it has had a big impact on several viewers! According to the director Hillary Bradfield (who has worked as a storyboard artist on hit Disney movies like the 2019 blockbuster success Frozen II and the new movie Encanto), “setting the story from a dancer’s perspective seemed just natural.”

“It’s part of the craft to be looking at your posture and checking things in the mirror,” she explained, “so it just seemed like a really good way to put her in that environment where she has to look at herself but she doesn’t want to.”

There have been some social media users who have attacked the animated short, but there are many Disney customers who love the new Walt Disney Animation Studios short and have felt a strong connection to its protagonist. In the short, a dancer’s perspective shifts from self-criticism to self-confidence. “When people watch the short, I hope they can feel more positively about themselves and how they look, and feel okay about the tough parts of the journey,” Hillary Bradfield said. “Sometimes you go to the dark place to get to the good place and that just makes the good place that much more beautiful.”

“Disney+ FINALLY made a short with a Plus Size lead!” one Disney+ subscriber Tweeted. “Let’s just say I was SOBBING.”

THIS IS NOT A DRILL! Disney+ FINALLY made a short with a Plus Size lead! It’s called Reflect and it’s part of the Short Circuit short series. Let’s just say I was SOBBING

“16 year old me needed this Disney short before I quit ballet because I didn’t want to be the fat girl in class anymore,” another fan wrote on social media, giving the short film a “10/10” review.

This positive reaction echoes the praise and emotional reactions that came from Encanto fans after they saw Luisa Madrigal combine femininity with strength last year in a muscular frame that was apparently strongly protested against by Disney leadership.

16 year old me needed this Disney short before I quit ballet because I didn’t want to be the fat girl in class anymore. I’m glad little ones will have this. 10/10 for Reflect! https://t.co/WAqEt3Tdpa

Bradfield received the chance to direct this short film specifically because Walt Disney Animation Studios has started a promising new initiative: any of their animation artists can pitch their short film and make one!

Bradfield shared that she felt a kinship with the character in Reflect just like many viewers did. “When it’s on a personal level, it’s a lot harder to be body positive,” the director mused. Any Disney Fanatic who has seen Disney shorts knows that they can be just as emotionally-moving, upsetting, or uplifting as longer Disney movies or TV shows — and apparently, Reflect is no exception!