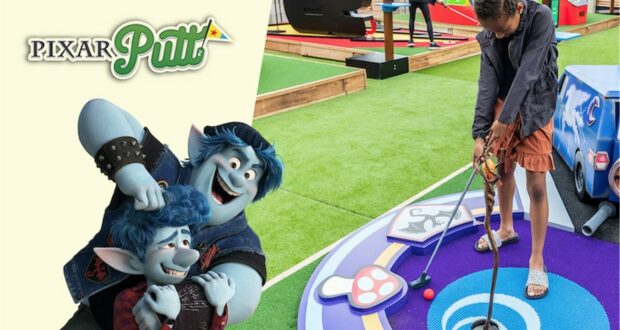 PIXAR PUTT is the ultimate pop-up, open-air mini-golf experience made up of 18 fun and interactive holes inspired by the stories, characters, and icons from some of Pixar’s most beloved films including Toy Story, The Incredibles, Monsters, Inc., Finding Nemo, Coco, A Bug’s Life, Wall-E, and Inside Out, Pixar Putt is set to take guests to infinity… and beyond! A perfect socially distant outing for any Pixar fan. Pixar Putt’s standard COVID Safe measures include capped player numbers on the course, physical distancing measures in queues and on course; sanitizer stations located onsite; plus sanitizing of all golfing equipment between users for every session, each day. These measures follow all federal and local guidelines and will be adjusted as those guidelines change. Tickets will only be available for purchase digitally, there are no physical tickets available for purchase on site. This online, contactless purchase process helps keep customers and staff COVID safe.

Ready to check out all the details, FAQs, and book your Pixar Putt session in New York City? Visit Pixar Putt website. In the meantime, anyone else hope Pixar Putt makes an appearance in or near Walt Disney World? Happy putt-putting, Pixar fans!