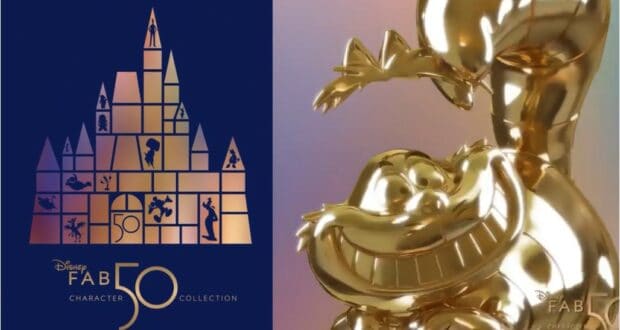 We are now just two months away from “The World’s Most Magical Celebration” honoring Walt Disney World’s 50th Anniversary! We continue to follow along with all the exciting news flowing out of Disney in preparation for the event, such as the arrival of two new nighttime spectaculars including “Disney Enchantment” at Magic Kingdom and “Harmonious” at EPCOT. Disney has even released a recent “sneak peek” at the 50th Anniversary merchandise collection. One experience we’re extremely excited about however is the “Disney Fab 50” sculptures coming to all four Walt Disney World parks. We’ve been following along to see which character will be added next… and now we have it!

Beginning October 1, guests will have a chance to scavenger hunt through all four parks to virtually “collect” each golden Disney character sculpture on Instagram. So far, we know Mickey Mouse, Goofy, Timon and Pumbaa, Lumiere and Cogsworth, Daisy Duck, Winnie the Pooh & Piglet, Edna Mode, Dante, and Joe Gardner joining the Fab 50. Now, we’re learning a favorite character from Alice in Wonderland is making the Fab 50 list. That’s right – Cheshire Cat will be taking his place among the Fab 50 sculptures!

As shared via Jeff Vahle Instagram: “It was my pleasure to join Ben and LaTara to reveal that Cheshire Cat is part of the “Disney Fab 50 Character Collection” you’ll soon find across the four @WaltDisneyWorld theme parks. Remember, “The World’s Most Magical Celebration” starts October 1!”

The Instagram video says Cheshire Cat will be available at Magic Kingdom Park beginning October 1. Why not try to find Cheshire Cat while snacking on one of the yummy Cheshire Cat Tail treats from the newly reopened Cheshire Café! Are there any characters you’re hoping Disney will add to the “Disney Fab 50” line up? We’ll keep sharing the news about which characters are included as Disney keeps it coming!