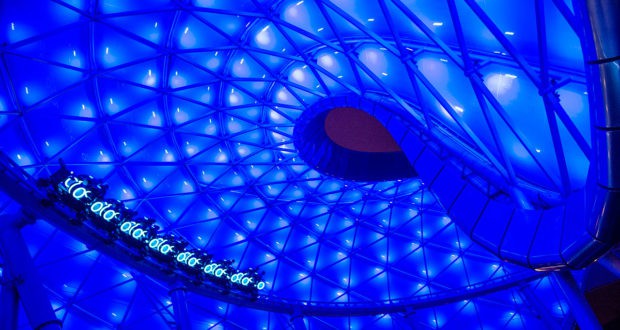 It’s been a long wait, but late 2021 will see Walt Disney World celebrate its 50th anniversary! Though many things, considering recent events, will look undoubtedly different than originally planned, the resort is still moving full steam ahead with the celebrations, as well as some new attractions and experiences. Here’s why we can’t wait to experience Walt Disney World in 2021 during the 50th Anniversary celebration.

The first ever MCU-themed attraction Guardians of the Galaxy: Cosmic Rewind is set to open in 2021. However, like most attractions on this list, excitement should be taken with caution as delays due to the pandemic continue. Nevertheless, you can expect plenty of Guardians-inspired mayhem as well as retro tracks to boot. You’ll also experience a roller coaster that rotates 360 degrees, so that you don’t miss out on any of the action as it unfolds all around you. In fact, you’ll even go backwards! After all, the clue’s in the name.

Shanghai Disneyland have long since had the pleasure of hosting this futuristic attraction, but next year (we hope) it will be Disney World’s turn. This ‘motorbike roller coaster’ is based on the cult ‘80s sci-fi Tron, in which humans explore an arcade world on Lightcycles, with which they slice through a neon-lit digital landscape known as the Grid. It will be the fastest Disney roller coaster in the world, while the Lightcycles themselves offer a unique experience for guests.

Prepare yourself for a spellbinding collaboration between two of the most creative forces on the planet – Cirque du Soleil and Disney. Drawn to Life follows a young girl who, with the aid of a magical pen gifted to her by her father, embarks on a whimsical journey into the past, all the while animation and acrobatics come bursting to life on stage in ways never seen.

Easily the most anticipated on this list, or of all things 2021 for that matter, is Star Wars: Galactic Starcruiser. Prepare to be whisked to that faraway galaxy, for what is being described as the most immersive and interactive hotel experience on the entire planet! You’ll board the Halcyon, where you’ll become immersed in your own customized adventure. This 2-night experience will be totally exclusive to Disney World, and it’s fair to say that once it docks just outside Disney’s Hollywood Studios, ‘the circle will be complete’…

One thing that is guaranteed to hit the resort next year is ‘a whole new world’ of merchandise lines. In fact, 2021 might just be the year to beat where new goodies are concerned. And we’re not just talking about new movies and TV shows – though there are plenty such as the arrival of Raya and The Last Dragon, but we’re referring to celebratory-themed merch that boasts Disney World’s milestone birthday, from pins to Mickey Ears, apparel to accessories, toys and way, way more.

The Disney Genie app will change the way you book your trip, giving you near countless options to customize your adventure. Let the Genie get to know you and your preferences, and he’ll do the rest of the work for you! Disney World is always unveiling new smart device apps, such as My Disney Experience and Play Disney Parks, but we think you’ll agree that ‘you’ve never had an app like this’! Full disclaimer – rubbing your smart device will not activate this app, nor is it limited to just three wishes.

The 50th anniversary celebrations will launch on October 1, 2021 for an 18-month celebration. Of course, we aren’t sure exactly what to expect but we’re hoping for the return of night-time events such as fireworks and parades, all tailored to the special occasion. As such events remain unavailable, it’s a tough one to call, but you can at the very least expect apt décor, all-new merchandise, themed snacks and so on.

When Epcot’s reinvention is complete, the all-new World Nature will introduce Journey of Water, inspired by the beloved hit movie Moana. Again, there’s no telling when we can expect it to open. But what we can expect is a beautiful tropical garden setting, host to interactive fountains – ‘living water’, so to speak – as well as a large Te Fiti, as seen in the movie (though not quite as big…). Unfortunately, with recent news, it’ll looking like this attraction may no debut until 2022.

So, there’s plenty to look forward to and enjoy now! And here’s to hoping that Walt Disney World can be enjoyed in a more traditional sense, at least at some point during the 50th Celerbation. It might be unlikely, though, as the world continues to try to get the virus under control, but we’ve no doubt that you’ll still be able to experience the magic of Disney. In the meantime, head over to the official Walt Disney World website to keep up to date regarding the current pandemic.