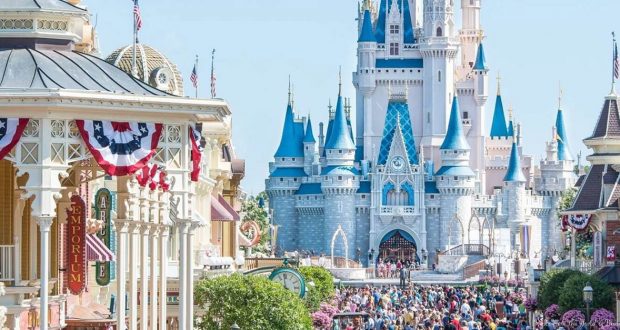 How to Enjoy Disney Parks When They’re Most Crowded

Sometimes you have to travel at one of Walt Disney World’s most crowded times, and let’s face it- the “off season” doesn’t exist the way it did in the past.  If you’re traveling at a peak time, you’ll want to take advantage of a few of these tips to minimize your wait times and crowd-navigating.  Don’t be discouraged if the parks are crowded; you can absolutely have a magical time even on the very busiest days.

For guests who are not as familiar with how crowded Walt Disney World can be, perhaps the worst thing about the crowds is the shock of it all.  Knowing what to expect during your intended travel time is useful in tempering your expectations and knowing how much planning you really need to do.  A well thought-out park touring plan is more critical during Spring Break, for instance, than during the 2nd week of September when most children have just gone back to school.

Park hours tend to be a bit longer during the busiest times of year, i.e. Spring Break, holidays, etc.  If you can close down the park at night when it’s open until midnight, you’ll enjoy some far less crowded time.  Similarly, try to rouse your family out of bed to “rope drop” in the morning.  Arriving at the park 30-60 minutes before opening means you’re ahead of the rest of the day guests who are rolling into the park at 10am.  Ride the big-name attractions first, and you’ll be ahead of the crowds all day.  Extra Magic Hours are also a great benefit for on-site guests, but don’t attend the park with Extra Magic Hours if you don’t think you’ll get there early enough to actually use that time.  These parks tend to get more crowded because many families choose to attend on the Extra Magic Hours day, even if they don’t arrive in time for the “extra” piece.

Invest in a Park Hopper

Adding the Park Hopper option to your theme park tickets is not always necessary, but if you’re travelling at peak times, you might want to consider it.  If the park you’re in turns out to feel way more crowded than you’d like, the option to hop to a less crowded feeling park might be just the break you need.  For instance, all the parks can be equally crowded, but a sprawling park like Epcot can feel a bit less crowded than Animal Kingdom.  Frustration is a fun-killer, so having extra flexibility can be key.  Consider combining this tip with #2, and enjoy Extra Magic Hours and then hop to a different park for the rest of the day.

Hard-ticketed events are certainly pricey add-ons to a trip, but they also offer opportunities to enjoy the parks with much smaller crowds.  If you’re traveling during Spring Break or Christmas weeks, I’d argue that the special events are a greater value than during lower crowd weeks in January or August, because they afford you that chance to enjoy some short wait times during very crowded periods.  Some favorite special events include Early Morning Magic, various dessert party options, Disney After Hours, and Mickey’s Not So Scary Halloween Party and Mickey’s Very Merry Christmas Party.

Use meals as breaks

Many families gravitate toward sit-down dinner reservations, but a nice lunch reservation doubles as a great meal and a chance to have a midday break in the air conditioning!  Attraction queues start to really reach their peak mid-day, so it’s a great time to avoid those lines and enjoy a meal.  No reservation? No problem.  Look for an available one on your My Disney Experience app when you’re hungry, or utilize Mobile Ordering at one of the many Quick Service options.  Either way, you’ll escape the lines and crowds for a bit!  You might even want to consider dining at a resort or at Disney Springs for a more substantial escape.  There are many fantastic restaurants at all of Disney’s resorts!

There are many things to enjoy in the parks that don’t involve waiting in line much, if at all.  Enjoying Epcot?  Take time to really explore the cultural exhibits in the World Showcase or one of the air conditioned films!  Battling crowds in Animal Kingdom?  Take a slow stroll through one of the animal discovery trails instead of waiting in a lengthy queue in Pandora.  Looking to avoid the Magic Kingdom crowds?  Consider getting a deck of (free) Sorcerer’s of the Magic Kingdom cards and defeating villains at the magic portals throughout the park.  We  don’t visit the Hall of Presidents or Country Bear Jamboree on every trip, but we certainly make time for them when we’re looking to escape the crush of the crowds!

… or, leave the parks altogether

Don’t take your resort amenities for granted.  Enjoy the pool (especially mid-day when the crowds are at their worst) or other special activity at your resort, or visit Disney Springs (it’s usually more crowded at night).

Use My Disney Experience to monitor wait times

Hopefully you’ve ridden the most popular rides or your must-do’s either early in the morning, during a special event, or with a FastPass. If you haven’t, avoid waiting in a very long line unless there seems to be no other time to ride the attraction.  Utilize the My Disney Experience app to check updates wait times, rather than wandering and reading the posted times.  It’s much easier to decide how to best use your time when you can see a map of the entire park and the wait times for each attraction all at once.

Use knowledge, planning, & FastPasses to your advantage

The early bird gets the worm, and the guest who rope-drops gets on the most rides.  Both are generally true.  Remember that most guests who attend the parks have probably done far less planning than you have, and use your knowledge to your advantage.  If you are equipped with a few pre-planned FastPasses and a general idea about the park layout and which attractions get the longest waits as the day goes on, you’re far better prepared to handle Walt Disney World crowds than the average guest.  Take on the day and enjoy- there is no “bad day” at Walt Disney World!

What are your favorite ways to contend with the crowds at Walt Disney World?  Do you shudder at the thought of visiting during a peak time, or do you embrace the craziness with your own strategies for keeping sane?  We’d love to hear what you have to say!