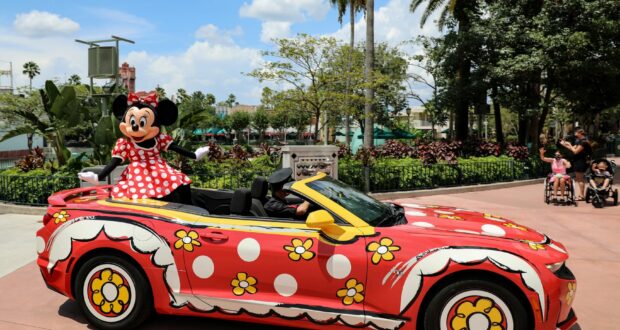 The fact that Walt Disney World is open is something of a bitter pill. Among the most joyous experiences are the Character Greetings – they’re a signature experience in visiting the resort. But that all such encounters remain temporarily unavailable does mean that extra sprinkling of fairy dust is missing. Meeting your favorite hero, whether it’s a bear whose paws are sticky with honey, or your favorite sheriff with a snake in his boots, is truly a memorable thing. But not all hope is lost, because here’s how you can still get your character fix during Walt Disney World’s phased reopening.

Character Greetings might be unavailable, but you’ll still find giant versions of Woody and Buzz at Toy Story Land, as well as Jesse and Rex, to name a few! Sure, aside from a singing Wheezy on Slinky Dog Dash – and of course Slinky himself – none of these characters move. But then they are toys – just wait ‘til your back is turned.

9. Frozen Ever After – World Showcase, Epcot

This Frozen-themed attraction plunges you straight into the wintry wilderness of Arendelle, where you’ll set sail along glassy waters, passing through white forests, green valleys and beyond. As well as the more popular characters, you’ll also meet the Trolls, an encounter that helps make this ride pretty rock n’ roll! Plus, don’t be surprised to spot Anna and Elsa occasionally near Frozen Ever After, in front of their house (aka former meet and greet location) waving at guests.

It would be easy to list all the attractions which feature models or animatronics of your favorite characters, but sometimes you just want to the real thing. And with this sing-along show inspired by the insanely popular franchise, you’ll not only enjoy the Frozen family on screen, but on stage too! Let it snow – er, we mean go!

If you want to meet the wisest baboon in the Pride Lands, then head on over to Rafiki’s Planet Watch. Okay, this Rafiki doesn’t move, but here’s there in spirit (as is often the case with him). There’s lots more fun to be had too, as you explore wild settings, which helps set everyone’s favorite monkey against an authentic backdrop.

While seeing your favorite characters during attractions isn’t quite the same, Lightning McQueen’s Racing Academy might be the exception to the rule. After all, the Lightning McQueen audio-animatronic is wheelie convincing, and should be considered Character Greetings in themselves. However, hugging them might prove difficult…

Another attraction that feels more like a Character Greeting (or sighting) of sorts is Star Tours – The Adventures Continue. No surprise, considering its entire queuing is centred around such an experience. You don’t need to visit a faraway galaxy to meet C-3PO and R2-D2 – as you’ll see them before you even board the Starspeeder!

Much like Character Greetings, traditional Character Dining is also unavailable. However, you can still see some of the classic bunch – Mickey, Minnie, Donald and Daisy – at Riviera Resort’s Topolino’s Terrace while enjoying breakfast! For safety reasons, they’re not allowed to sit with guests, but seeing them is still a real treat! Can’t snag a reservation at Topolino’s Terrace? Try to make a reservation for Chef Mickey’s at Disney’s Contemporary Resort to see Mickey and his pals.

Many attractions featuring characters involve observing them while they take part in their classic adventures. However, with this one, you’re part of the story! Battle Zurg with the help of the Little Green Men, and meet an awesome audio-animatronic Buzz Lightyear too (just don’t tell him he isn’t a real space ranger, as Disney World will end up picking up the pieces…).

If you wish to see characters from your favorite tale as old as time, you needn’t visit a magical castle in a dark forest setting. At Disney World, you can enjoy them on screen and on stage from the comfort of a theater seat.  This enchanting, sing-along performance takes place at Epcot’s World Showcase, so be their guest!

Character Greetings will be unavailable for some time, but that doesn’t mean Disney World hasn’t come up with new ways for you to get your fix. Like select modified character dining, there are other ways to see friendly faces as you explore. Magic Kingdom Park and Star Wars: Galaxy’s Edge are good places to start to catch these random appearances. Plus, don’t miss the character cavalcade available within each of Walt Disney World’s four parks.

Feel better knowing that you can still see most of your favorite Disney characters at the parks? Thought so! While these things are far from a good old hug or a handshake with the likes of Minnie or Winnie, finding new ways to enjoy the things we love is important. Disney World might seem a little different these days, but the magic is still there. You just have to know where to find it.