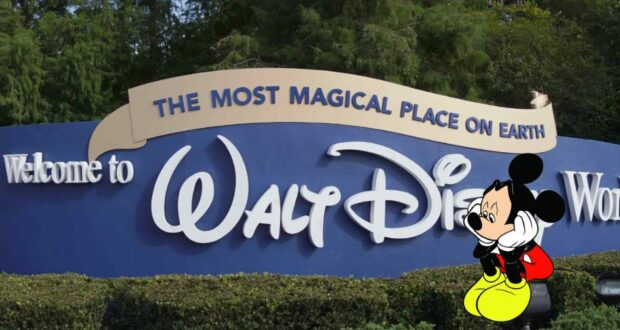 When driving into Walt Disney World Resort, iconic signs greet Guests year after year, becoming a beloved part of the Disney experience. Well, on the heels of an iconic sign being demolished, reports are coming in that there may be a second sign removal in the works.

We previously shared the news that the fan-favorite Twilight Zone Tower of Terror advertisement sign on World Drive was demolished to make way for landscaping in its place.

Now, the “Welcome to Walt Disney World” signage at Hotel Plaza Boulevard and SR 535 near Disney Springs will likely to be next.

@bioreconstruct took to social media to report, “Very wide panorama photo of the Welcome to Walt Disney World signage at Hotel Plaza Blvd and SR 535. Likely to be removed soon. There’s stakes marking upcoming construction nearby. This intersection to have an overpass.”

The former shopping and dining district known as the CrossRoad Plaza, directly across from Disney’s Hotel Plaza Blvd sign, has been undergoing demolition and construction. This high-traffic area will be the center of a new planned overpass.

Here’s the current view from Hotel Plaza Blvd to the demolition of the former CrossRoads Plaza:

RELATED: Miss Pleasure Island? For $15,000 You Can Add This Original Funmeister Sign to Your Collection!

@bioreconstruct goes on to further note the new plans with current plans of the upcoming overpass project:

Its good news to hear the traffic issues at this popular intersection will eventually be solved, but sad to see another Walt Disney World Resort sign disappear.

Traffic going in and out of Orlando has been a Florida focus. They have recently worked to improve areas with improvements such as a Toll Express Lane option now available on I-4 through Orlando.

We have high hopes that, unlike the Tower of Terror billboard sign being demolished for landscape, when construction is complete on the overpass, Disney will work to add in a new theme park sign to welcome its Guests via Hotel Plaza Blvd.