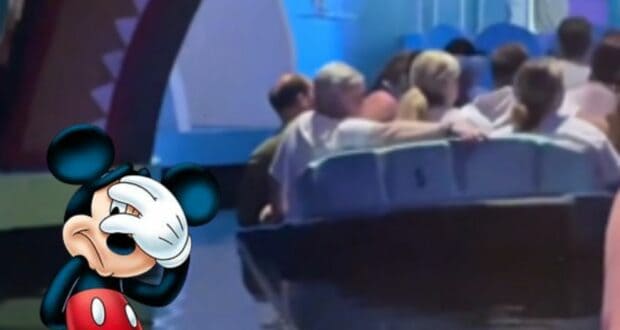 It’s a magical day at Walt Disney World Resort, but sometimes not-so-magical moments occur, leaving Guests stranded… in this situation, for over an hour.

Whenever a sinking boat is being reported at Walt Disney World, typically, it centers back to Magic Kingdom Park and the iconic attraction Splash Mountain. And as moments of Splash Mountain boats sinking have been caught on camera, it seems like the latest boating issues involve “it’s a small world” attraction in Fantasyland.

RELATED: One of Disney’s Most Iconic Songs Has Been Inducted Into the Library Congress

Riding “it’s a small world” is a rite of passage among Disney fans. The music, the animatronic dolls, and the overall Disney experience are memorable ones that Guests seem to either love or hate.

In a recent video, Guests were reportedly stuck on “it’s a small world” for over an hour, with the video showing the left side of one of the ride’s boats sinking.

@hazeysmom22 took to social media to share a video, noting, “We were stuck for over an hour, the torture 😭 #smallworlddisneybound #disney #disneyworld.” Check out the video below:

RELATED: Video – TikToker Receives Backlash After Putting Foot in the Water of “it’s a small world”

It seems like everyone in that boat needs to lean right!

Disney describes “it’s a small world” attraction as “The Happiest Cruise That Ever Sailed:”

“Sing along to the classic anthem of world peace during a delightful musical boat tour. Cruise along the Seven Seaways Waterway on a gentle 10-minute journey through all 7 continents. Pass through vivid, fantastical scenes representing the iconic sights and sounds of dozens of nations.“

“Behold a cast of dancing darlings from nearly every corner of the globe and watch as the Audio-Animatronics figures achieve universal harmony as they sing one song in many languages. By journey’s end, Walt Disney’s simple message is clear: it truly is a small world after all!“

Hopefully, these Guests were offered a complimentary Disney Lightning Lane pass to make up for time lost in the Disney Park while stranded on the boat ride.