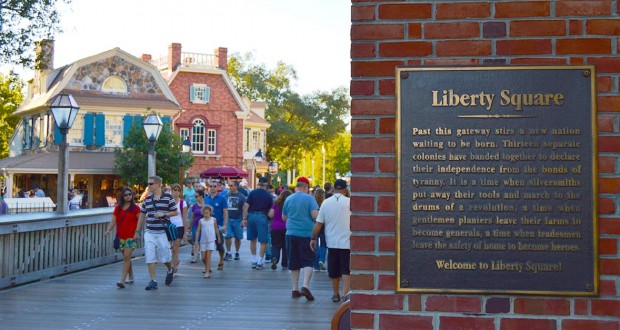 This past weekend I took the Keys to the Kingdom tour at Magic Kingdom. This tour is one of many backstage tours that Disney offers to satisfy your inner Disney nerd and get a peek into the elusive backstage areas and into the famed utilidors beneath the park. The tour costs $99 per person and does require valid park admission to participate. There were several tour groups that day and each tour group had about 12-15 people in the group.

I was worried that we were going to be late for the tour, but crowds at the park were not bad, so I was actually able to do some shopping at the Emporium before the tour began (I picked up the Scar, Hook, and Jafar BandIts, as well as the Haunted Mansion hitch-hiking ghosts). The tour begins at the Chamber of Commerce just inside of the park. Before our tour began, we were directed to select one of 6 entrées from the Columbia Harbor House (lunch IS included in the price of the tour). Disney also provided bottled water while we waited for the tour to begin.

As the minute hand neared 9 AM, we were directed to the open area between the Chamber of Commerce and the Guest Relations Office. We were given listening devices (both my fiancée and I had read reviews on-line about it being difficult to hear, so I am guessing this is an attempt to remediate that problem). Once the tour began, Jordan, our guide, had everyone introduce ourselves, as well as name our favorite Disney character. The Fab Five dominated most everyone’s answers. I don’t want to give away/spoil/ruin the secrets of the tour, but before moving down Main Street, U.S.A., we were given a little of the history of the park and the importance behind the design of Main Street, U.S.A.

As we walked down Main Street, we took a slight detour onto Center Street (it is the alcove/nook) located on your right as you walk towards Cinderella’s Castle. While we were there, we learned some more history about the buying of the land that Disney owns in Central Florida, as well as about the construction of the park. During our time here, we were also personally greeted by Mary Poppins. I had never known her to be in the Magic Kingdom (it also struck me as odd that she was on Main Street, U.S.A – she almost seemed out of place).

We continued down Main Street to the Hub (which is currently under heavy renovation as Disney is trying to reduce congestion in this area during parades and fireworks). While we were here, Jordan told us about the design of the Hub and how the lands are set-up to visually pull you into an area with a focal point and how that related to the theme of the respective land. Jordan also gave us some information about the Partners statue and background about the sculptor. However, since it is undergoing renovation, we were unable to see the statue itself.

We headed off towards Adventureland and learned about the history and availability of Dole Whips. We also learned about the construction of the Magic Carpets of Aladdin and how Disney recycled the camels from a parade that used to be at Disney’s Hollywood Studios. After this, we headed down to Jungle Cruise. We boarded our own boat and the skipper did not get to tell any of his usual jokes, but Jordan shared with us the original plans for Jungle Cruise and how things changed as it was constructed. We were told some secrets about the design of the ride and some of the showbiz tricks used in the ride itself.

After we disembarked, we stopped outside of the Enchanted Tiki Room where we learned about the history of Audio-Animatronics at Disney World and about the construction of the building, as well as the design. Before crossing over into Frontierland, we were treated to the history of Pirates of the Caribbean at Disney World. Most assume that it was an opening day attraction, but it was not constructed until 1973. As we were walking to the parade entrance/exit point, Jordan shared with us something that I had never known: whenever Golden Oak Outpost is open, stop by. Why? Golden Oak is a kind of “test kitchen” where Disney will test out new menu items that may be placed into restaurants if they do well.

After crossing over the wooden gate next to Splash Mountain, we were finally backstage! In this area, we learned about the Disney parades and all of the work that goes into learning the routines for parades, the qualifications to drive one of the floats, and the daily maintenance that each float receives. We also got access to one of the storage buildings to see some of the floats (some were left over from Mickey’s Once Upon a Christmastime Parade and the rest were from the Main Street Electrical Parade). Jordan also shared with us the magic that goes into the trash collection at the Magic Kingdom. Once we ventured back on-stage, we headed towards Columbia Harbor House for lunch.

We got a 30-minute break at Columbia Harbor House to rest and enjoy our lunch. We also got a pin celebrating the tour. After lunch, we headed over to Haunted Mansion and again received some information about the attractions design and upkeep. We then were able to sneak in the exit of Haunted Mansion and were able to enjoy a trip on our Doom Buggy. Jordan was able to point out a hidden Mickey that I was previously unaware of! He also pointed out the nod to Mr. Toad in the pet cemetery (I had previously been told of his presence there, but I had never actually seen it).

We made our way back into Liberty Square where we learned about the historical accuracy of the area (blown glass, shudders hung off crooked to reflect the practice to use leather straps and not metal mounts during the Revolutionary War). I was confronted with some information that I had been told was not true (it involves the use of the presidential seal in the Hall of Presidents – some say that an act of Congress was needed to allow Disney to have it on display. One podcaster has researched the issue and reported that no such approval was given and, in fact, is not needed). Anyway, we walked back over to the area in front of Princess Tiana’s greeting area. Here we learned more about Cinderella’s Castle, and the suite inside of the castle. Once we were done here, Jordan led us over to the First Aid area between Casey’s Corner and the Crystal Palace where we got a bathroom break before we headed down to the utilidors.

The utilidor portion of the tour was what I was looking forward to and the reason why I wanted to do the tour. We travelled backstage and we got to see a lot of Cast Members on a break (I saw Alice with her hair in a ponytail and Merida texting on a cell phone)! We headed downstairs to the first floor of Magic Kingdom. Once in the utilidors you get the sense of the total operation and all of the hustle and bustle. There were Cast Members going into storage closets for the Emporium and utility workers driving around in golf carts. We walked around the square utilidors that services the Main Street, U.S.A. area and saw the Cast Member pin exchange area. Once our lap around the area was complete, we headed back upstairs for questions and the end of the tour.

Overall, I would recommend this tour. It takes about 5 hours to complete. There is a decent amount of walking, so make sure to wear comfortable shoes. Some of my friends commented before I took the tour that they would never do the tour because they were concerned it would ruin the magic. I didn’t share their concerns and I certainly don’t feel that now. I think it offers a wonderful background to the Magic Kingdom and makes you appreciate all of the work that you don’t see when you are on-stage. As the tour was ending, I already was researching what backstage tour to do next. What do you think? Would you want to do Keys to the Kingdom?