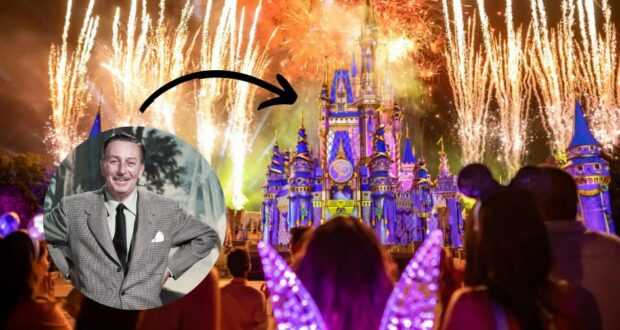 Walt Disney World Resort announced it would be testing fireworks at Magic Kingdom Park during the midnight hours between August 15 and August 16, 2022. Now, morning reports share Disney is reportedly making changes to its current nighttime spectacular.

It wasn’t long ago when we said goodbye to the fan-favorite nighttime spectacular called “Happily Ever After” at Magic Kingdom Park. When the new “The World’s Most Magical Celebration” 50th Anniversary fireworks show and projection called ” Disney Enchantment” was displayed on October 1st, 2021, we were all eager to see what Disney had created.

Unfortunately, Disney fans were not super impressed, particularly with the dismissal of any sign of the Disney Park’s creative mind, Walt Disney.

And while reports are flurrying that The Walt Disney Company is working to remove all signs of Walt E. Disney from its Parks and experiences, it seems like Disney is working to prove otherwise.

Disney made a last-minute announcement on Monday, August 15, that it would be testing fireworks over the midnight hours, noting, “We will be conducting overnight fireworks testing at Magic Kingdom Park tonight between 12:00 a.m. and 1:00 a.m. We will do our best to keep the noise to a minimum and apologize to our neighbors and Guests for this early-morning inconvenience.”

We thought this was unusual as Disney usually provides notice at least a day or two before testing fireworks. Now, the morning after the testing, Disney fans are flooding social media with the news that changes are reportedly coming to “Disney Enchantment,” Magic Kingdom’s current fireworks and projection show on Cinderella Castle.

@onelittlesparkjl took to social media on August 16, 2022, to share a brief video of the projection testing, noting, “We’re gonna cry…truly cannot believe we caught this live on our YouTube channel but we cannot WAIT to see this in person soon.”

And YES – it looks like the Disney experience may introduce a piece of Walt into the nighttime show! Check out the video below:

That’s Walt… and we even see an image of Roy Disney in there!

While this video proof seems pretty legit, we are eager to hear confirmation from Walt Disney World Resort. Speculation among fans believes maybe we will hear more from The Walt Disney Company about this potential Disney Enchantment update at the 2022 D23 Expo in Anaheim, California, coming soon on September 9 – 11.

Could it be a Disney dream come true?! We will be sure to share any theme park updates about Disney Enchantment changes as we learn more about this exciting, hopeful update to Magic Kingdom’s nighttime spectacular.