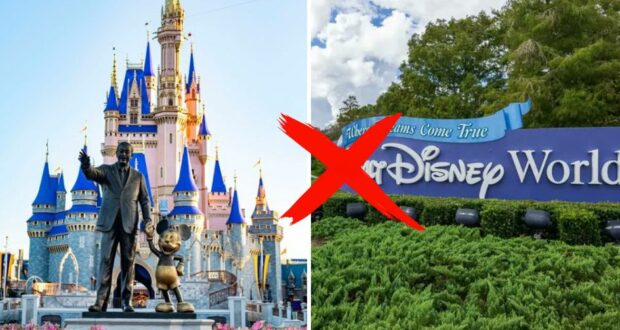 Walt Disney World is trending on social media with a rumor at the source of all the chatter. What’s the rumor mill up to now? Apparently, Disney is considering removing “Walt” from Walt Disney World.

Walt Disney World Resort has been at the center of several debates in recent months. The Florida Gov. Ron DeSantis vs. Disney issues and the loss of Disney’s Reedy Creek District are just a couple of hard-hitting pieces for the Disney Parks in Central Florida.

Disney fans aren’t thrilled with how Disney CEO Bob Chapek and his team have been handling certain Disney Park and Resort decisions, with the perspective that they are taking the magic Walt first created away from the Disney Park experience.

With Disney’s Magical Express gone, FastPass turned into Disney Genie, Splash Mountain being transformed into Tiana’s Bayou Adventure, complimentary MagicBands for Disney Resort Guests gone, the Disney Park Pass Reservation system, and much more… we suspect some fear is slipping in among the Disney fandom.

Yes, Disney is removing Walt Disney World signage at Hotel Plaza Boulevard and SR 535 near Disney Springs to make way for a new overpass at that intersection.

And yes, Walt’s opening day speech was left out of Disneyland’s Anniversary celebration, but are these just the start of Walter Elias Disney being slowly removed from the Disney scene?

Disney fans are taking to social media to share their concern, with most asking Disney to please leave the “Walt” in Walt Disney World.

@parkscopejoe tweets, “If the Disney Dish rumors are true then Josh and Bob have some big balls if they’re going to rename Walt Disney World to Disney World (or Disneyworld).”

@parkscopejoe follows up the tweet with another comment, “It makes no actual sense to change the name which is why at the moment I’m just chalking it up to rumor silly season.”

@OrangeGrove55 tweets, “Adding Walt to the name was Roy’s way of paying homage to his late brother. The name has worked very well for 50 years, hugely successful, no reason to change it. Imho.”

When questioned about Walt Disney World, @WDWTales adds, “There are rumors that WDW is dropping the W”

@WDWManimal tweets an image of Walt Disney pointing to his plans in the heart of Florida with, “I can’t believe I am having to say this, but it’s “Walt Disney World.” That’s what it IS called and what it SHOULD be called.”

Does “Disneyworld” sound like a better title for the Florida theme park?

The idea of Disney taking “Walt” out of Walt Disney World seems far fetched but at the same time, we understand the concern of Disney fans.

If Disney were to remove Walt, the amount of money and energy to do so would be insurmountable. With signage, documents, merchandise, and more… it simply doesn’t make sense.

We hope Disney makes a statement to clear the rumor mill up so Disney fans can rest at ease.