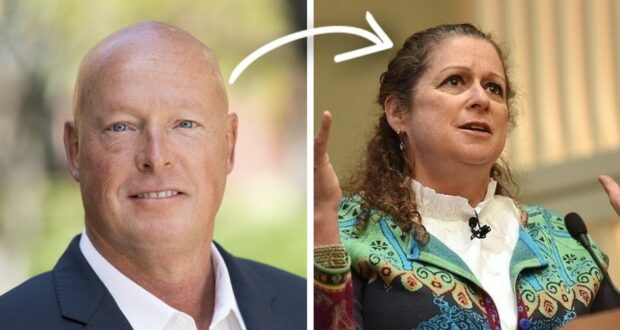 Petitions. This seems like the new route for Disney fans when they disagree with the direction The Walt Disney Company is taking. One petition to replace Disney CEO Bob Chapek with Abigail Disney (the granddaughter of Roy O Disney) has surfaced.

It’s nothing new to see Bob Chapek’s name in petitions. Several “fire Bob Chapek” petitions surface on social media from time to time. A recent meeting, however, of The Walt Disney Company board seems to solidify Chapek’s position as CEO.

RELATED: OpEd – I Don’t Think We are Actually Mad at Bob Chapek

And while many disagree with the way Chapek has been running the company since he took the reins from former CEO Bob Iger (who has since made it clear he didn’t want Chapek as a replacement), it is clear that Chapek is not everyone’s favorite Disney Cast Member.

And with Bob Iger making it very clear he will not be returning to The Walt Disney Company, there are still whispers and thoughts on who would be a good replacement for Chapek. It wasn’t too long ago Chapek fired one candidate, Peter Rice.

One petition suggest the replace Bob Chakep with Abigail Disney. Abigail Disney is the granddaughter of Roy O. Disney, who was Walt’s brother and the driving force behind the completion of Walt Disney World Resort after the death of his brother.

This isn’t the first time there has been a mention of Abigail Disney, as the film producer, philanthropist, and social activist has a reputation for speaking her mind about Disney’s endeavors.

Her criticism of The Walt Disney Co. comes in many parts, as she recently exposed the poverty level wages in a documentary for the Disney Cast Members. But, is the Disney Heiress right for the Disney CEO position?

“Ever since he became CEO of The Walt Disney Company on February 25, 2020, Bob Chapek has made Disney worse & worse over time. He has allowed the cancellation of projects such as The Owl House and Nimona, along with funding bills and organizations that will put LGBTQIA+ people in grand jeopardy.”

“This has gone far enough, and he needs to be stopped. Remember the time back in the 1990s when Michael Eisner was ruining Disney, the person trying to save it was Roy E Disney. Well, His daughter Abigail Disney is also highly critical of the company. I think its time we need a new CEO that actually cares for the safety of its fans, which is why I am calling upon the Board of Directors of The Walt Disney Company to fire Bob Iger and replace him with Abigail Disney.”

“Putting her in charge of the company would be doing everyone a big favor, as she is against anti-LGBTQIA and is an active philanthropist. If you must, please share this with everyone you know, your mothers, your fathers, your siblings, everyone must know.”

The petition currently has only 229 signatures with a 500 signature goal.

While we aren’t sure if this petition will gain any traction, we have seen other petitions from Disney fans do well, such as the petition to get Amber Heard fired for abusing Johnny Depp, which has over 2.5 million signatures. We’ve also seen petitions to both retheme Splash Mountain and to leave Splash Mountain as is over the years.

But will this “Replace Bob Chapek with Abigail Disney” petition go any further than its few signatures? Only time will tell.