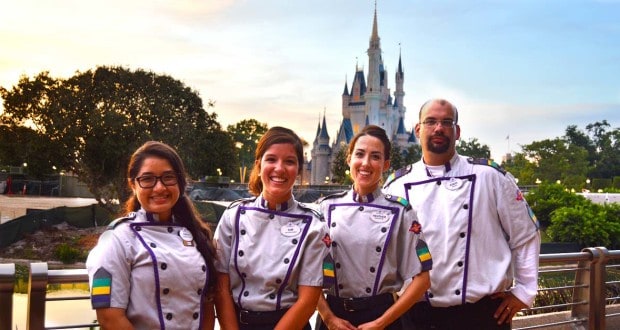 The Not-So-Magical Side: 8 Unfortunate Jobs in Walt Disney World

As someone who has always dreamed of being an official Disney Cast Member, there are literally dozens of jobs that seem utterly magical. What could be more glamorous than dressing as a princess each day or more exciting than setting off the pyrotechnical explosions that wow thousands of guests each night? But did you ever think of all of the people who have to do things that might not be so appealing? Here’s a list of 8 unfortunate jobs in Disney that make it more magical for the rest of us. Of course every job at Disney has wonderful perks (being part of the *magic* for starters!) that make even the most unseemly tasks seem worth it!

Disney loves to add the word “host” to some of their less exciting jobs. At Disney, you’re not just a custodian; you’re a custodial “host”. Basically it implies that you would do all of the things in your regular job description, and also interact with guests in a “magical” Disney way. In other words, a custodial host would power wash the sidewalk, but also answer your questions about where the pool can be found, and do it all with a smile!

Where are Cinderella’s enchanted birds and mice when you need them? Apparently they’re not on duty in Disney World, because they have to hire actual people to clean up after the guests. And frankly, the guests can be messy and gross. I’m always so grateful for the friendly and helpful “Mousekeepers” on my Disney vacations. They pick up after me, make my bed, and replace the magical little soaps that smell like Disney.

Being head “pooper scooper” during the Mickey’s Not So Scary Halloween Party events might not be for everyone. There’s just nothing magical about picking up horse manure. Of course, stepping in it wouldn’t be very magical, either. But if you love watching folks lined up for the parade react to the headless horseman as his beautiful steed prances down Main Street – this could be worth it!

It should come as no great surprise that most of the people visiting guest services aren’t there to tell Disney what a magical place it is. And we all know how calm and reasonable the general public can be when they are upset. I always make it a point on my Disney vacations to visit guest services in a theme park at least once, just to tell someone there how happy I am and how much I love Disney. It’s worth the wait in line just to see the smile on their faces.

Before the fireworks shows in Magic Kingdom each night, certain areas of the ground are taped off to delineate where guests may or may not stand while they view. Each night, a few lucky cast members spend several hours prior to the fireworks, hunched over, applying what seems like MILES of tape to the pavement. And what is their reward for completing this tedious task? The honor of pulling it all back up 30 minutes later!

Imagine spending 8 hours every day looking at the Happiest Place on Earth…from the parking lot. Now imagine doing that in 100 degree heat and 90% humidity while standing on black top. Add to that the possibility of being yelled at by all of the disgruntled people you have to turn away because the parking lot is full. Sound magical?

In an attempt to avoid the inevitable “cattle drive” following a Fantasmic performance, I often hang out on the bleachers with my family and take a few minutes to regroup. The first time I did this I was positively shocked by the amount of trash left behind by guests. It takes an entire team of cast members (I’m talking 10 or 12 people) nearly 30 minutes to return the space to its pre-show condition. And if they’re really lucky, they get to do it twice in one night!

If you take a close look the next time you’re on “the happiest cruise that ever sailed”, you’ll notice an ever-so-slight build-up of muck along the water line on the pedestals that support the singing dolls. This is an inevitable consequence of the maintenance that must be done to keep the boats “sailing” along their track, but the build-up would be much more noticeable if there wasn’t someone in there on a regular basis cleaning it off. I imagine a college intern on his first night being handed waders and assigned this task.

You may wonder why janitorial services didn’t make this list. Surprisingly, many Cast Members report that this is actually one of their favorite assignments. While janitorial duties include cleaning up the unfortunate results of post-chili dog rides on Mission Space, they also offer Cast Members the freedom to roam in a fairly wide area, interact with guests to answer questions, take photos, etc, and view some of the park entertainment during their shifts. According to the people I’ve spoken to, the pros far outweigh the cons on this job.