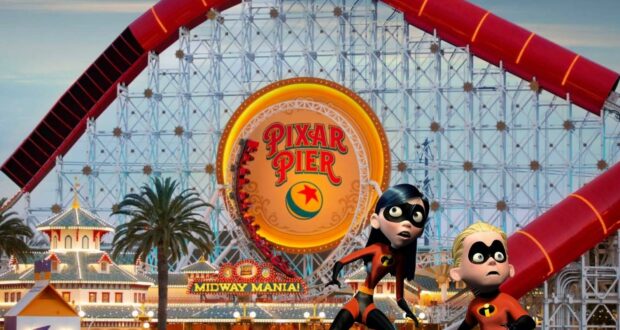 A Disney Guest recently shared her experience being evacuated from a Disney Park roller coaster, along with video footage of the terrifying incident.

Sometimes, however, the dreams can turn a little scarier than Guests like, which is what happened this week at Disney California Adventure Park in Southern California.

Disney Guest and TikToker, @kristenpoops visited Pixar Pier with a friend, and while riding The Incredicoaster, had to be evacuated. The Guest took to the social media platform to share her experience.

The Guest took to the platform and explained that the ride suddenly stopped quickly after launching, giving many of the Guests headaches. She shared a video of the angle at which they were stuck, calling it “mildly terrifying.” She continued that maintenance crews arrived to remove the stranded Guests from the roller coaster. Unfortunately, the OP’s friend recently underwent surgery and required a special fire department chair to carry her down the coaster’s steep maintenance staircase.

Some commenters noted a particular token of gratitude to the Disney Cast Members for being able to help in the specific situation of the OP’s friend.

Used genie+ for incredicoaster aaaaaand people were stuck, so it’s currently down for at least an hr from Disneyland

Another Disney Guest, u/Silly_Goose88, shared a photo to Reddit after waiting in line for an hour to ride the roller coaster. In it, you can see the stranded Guests coming down the emergency staircase.

At the time of publishing, The Incredicoaster is back up and running, and per reports, all Guests are safe, and no one was hurt.

We at Disney Fanatic will continue to keep readers updated on the latest Disney Park and Disney news.