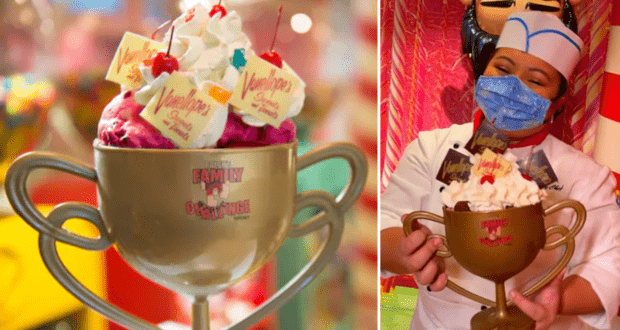 Disney foodies know all about the Kitchen Sink, served at Beaches and Cream and Disney’s Beach Club Resort, which packs in eight huge scoops of ice cream plus all the toppings in the house, including a whole can of whipped cream (that’s right, a whole can!) Did you know Disney offers another family ice cream challenge at sea, with Disney Cruise Line? Next time you set sail aboard the Disney Dream, head over to Vanellope’s Sweets and Treats to try Ralph’s Family Challenge!

Take a look at this incredible sundae in this video shared by Disney Parks on TikTok:

Served in an oversized winners cup from one of Vanellope’s races, this Wreck-It Ralph (2012) inspired dessert starts with eight scoops of ice cream (or gelato, one of the things that really sets this challenge apart from other Disney Parks and Disney Cruise Line desserts is that you can swap out traditional ice cream for gelato!)

Next, select eight toppings of your choice. Vanellope’s Sweets and Treats has more varieties of toppings than you could ever imagine, so choosing eight might not be as easy as you think. Will you go classic with sprinkles? Something chocolatey like crushed Oreos, or sweet with gummy bears or gummy worms? There are really endless possibilities for making Ralph’s Family Challenge your own. 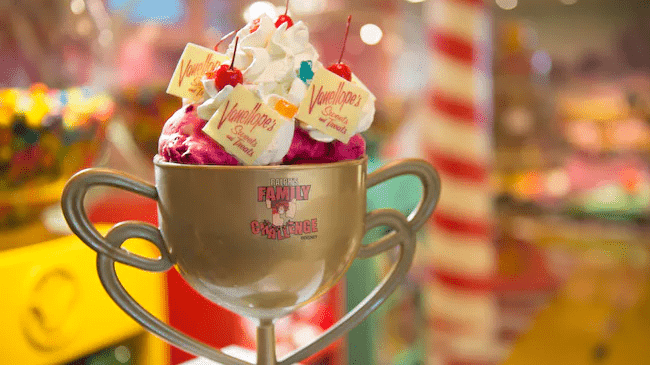 The sundae is then covered with whipped cream and multiple cherries plus a few chocolate squares exclusive to Vanellope’s Sweets and Treats. And, those who order Ralph’s Family Challenge are winners in their own right (whether they finish or not, it is a lot of ice cream after all) so Guests will be able to take home the keepsake trophy bowl.

While aboard the Disney Dream, be sure to check out all of the desserts Vanellope’s Sweets and Treats has to offer including an adorable sundae inspired by Vanellope’s racecar, classic sundaes, candies, and more. 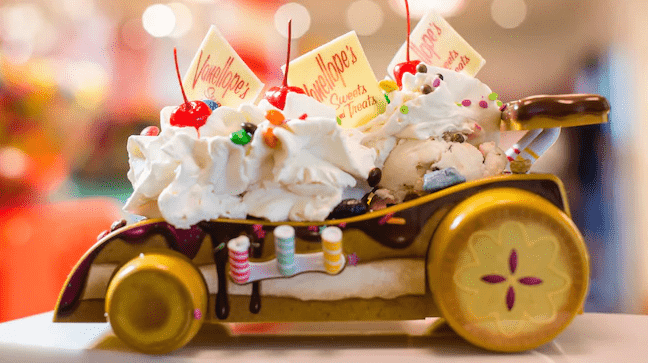 Vanellope’s Sweets and Treats is available exclusively on the Disney Dream, with other Disney Cruise Line ships offering their own unique takes on a classic ice cream parlor/soda shop concept, including the Disney Wish, the newest ship to join Disney Cruise Line which launches this summer.