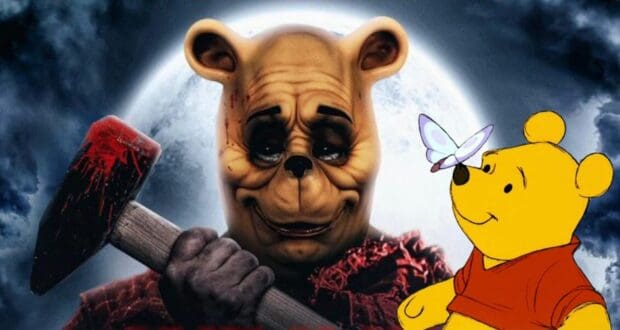 Ok, Winnie The Pooh fans… this is one you may not want to see! It’s hard to imagine Pooh Bear as anything but loveable, but a new horror movie attempts to prove otherwise.

We previously shared the news that Winnie the Pooh will soon be turned into a horror film. While details were few and far between, we’re now seeing new images and details released for the film titled “Winnie-The-Pooh: Blood and Honey.”

Winnie the Pooh and his loveable Hundred Acre Wood friends hit the public domain as of January 2022 when Disney lost select rights to the willy, nilly, silly ol’ bear and his friends.

While Disney’s adaptation of Winnie the Pooh and friends is still safe, the characters based on Milne’s son Christopher Robin and his stuffed animals that appeared in Winnie-the-Pooh books by AA Milne are public domain. This opens the door to adaptations of Winnie the Pooh, Eeyore, Tigger, Piglet, Kanga, and Roo.

Disney has no involvement in the new horror film, Winnie-The-Pooh: Blood and Honey, but our love for Pooh can’t help but give us goosebumps over the new images as the horror film that is being produced by Jagged Edge Productions, which creates straight-to-VOD horror films.

The film’s tagline in the new film poster is “This ain’t no bedtime story.” IMDb notes the production as, “It follows Pooh and Piglet as they go on a rampage after Christopher Robin abandons them.”

The images for the new film give a whole new creepy look to Winne the Pooh and his best pal, Piglet, and the stories they will now tell in this horror film.

Currently, Winnie-The-Pooh: Blood and Honey has no release date. We will update readers when a release date and platform are shared, so you’ll know when to shield young Winne the Pooh fans’ eyes from the horror film adaptation.