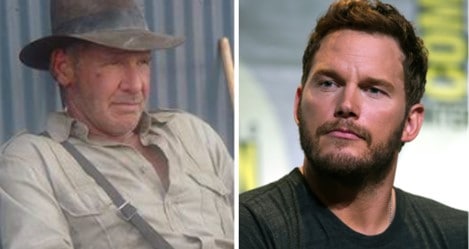 Lucasfilm confirmed plans to bring back Harrison Ford for Indiana Jones 5 with a new director taking over for Steven Spielberg, but now it sounds like it could be setting up Chris Pratt to take over the hat and whip. Rumors indicated that Pratt would be taking over for Ford so the franchise could continue, but Ford himself has denounced those claims. Producer Frank Marshall even told Den of Geek last month, “There will only be one Indiana Jones and that’s Harrison Ford.” But that might just be a smokescreen for Pratt’s takeover.

According to Daniel Richtman, Lucasfilm is looking at Pratt to play a younger version of the character. He also claims that Indiana Jones 5 is planning to set up multiple spin-off films as well as a Disney+ series and animated show. While Richtman has given good information in the past, we are certainly surprised to see these Pratt rumors resurface after they were previously debunked.

For now, the only known fact about Indiana Jones 5 is that Steven Spielberg will no longer be directing and that James Mangold is set to take over the position. Mangold most recently helmed Ford V Ferrari, which was nominated for Best Picture at the Oscars. The director has also tackled Logan, 3:10 to Yuma, Walk the Line, and more.

Indiana Jones 5 is currently slated to be in theaters July 29, 2022. What do you think about Chris Pratt joining the cast?