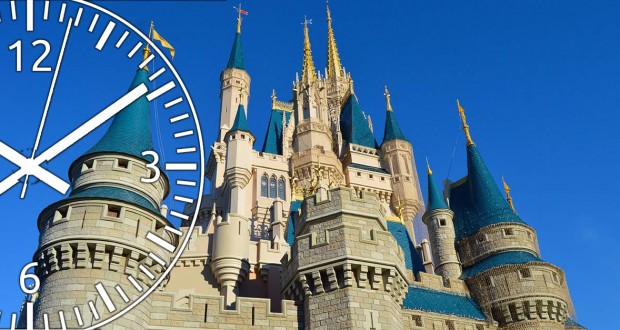 Disney has been holding special 24 hour events since 2012. In 2012 it was introduced as an extra Disney Day on February 29th. Since then, the event has marked the unofficial start to summer on the Friday before Memorial Day. There is a lot to see and enjoy during 24 hours in the Magic Kingdom and this list will showcase our favorite 24 things to do!

24 – Food – most of the restaurants in the Magic Kingdom were open extended hours so you can enjoy a late dinner with Pooh or an early lunch with Sonny Eclipse. There were also specialty food items for the event!

23 – Specialty Merchandise – this year Disney featured a white t-shirt with writing that changed with heat. There were no pins this year and Disney did do a good job about having a lot of stock – the t-shirts did not sell out until around 8 PM.

22 – Events – since the Magic Kingdom is open for 24 hours, Disney staged a lot of their shows and parades more often. This was a welcome treat for people who park hop and don’t stick around the park for them. The Festival of Fantasy parade was shown twice, as was the Main Street Electrical Parade and Celebrate the Magic was shown three times.

21 – Parking – if you get to the Magic Kingdom early enough (I got there around 5.40 AM) and was able to park in the first parking lot. However, if you got there late in the day, some people were diverted to Epcot and were told to take the monorail from there.

20 – Special Welcome – similar to every other day at Magic Kingdom there was a welcome ceremony. This ceremony featured Olaf who was the mascot of the even this year. It was an unexpected surprise and twist to the normal show.

17 – FastPass – Disney allowed guests to utilize FastPasses until 3 AM. This means that if you used your three FastPasses early in the morning, you could continue to get FastPasses one at time until 3 AM. I was able to get 10 FastPasses over the course of the day.

16 – Dancing – during the late night and early morning hours when energy levels begun to wane, Disney had some DJs spinning music in Frontierland and in the Hub. It was certainly the shot of energy that I needed to make it through the remainder of the evening.

15 – Characters – similar to some the holiday parties, there were specialty characters available to meet. These characters were in addition to the characters who call the Magic Kingdom home normally.

13 – Riding All of the Rides – since you have 24 hours in Magic Kingdom, one would be able to ride all of the rides. I tried, but ultimately fell short by one ride. Planning is essential if you are trying to experience everything!

12 – Shows – when visiting the Magic Kingdom, some people focus on rides and parades. Sometimes the smaller things get overlooked,

11 – Atmosphere – the cast members of the Magic Kingdom were just as enthused about the prospect of the entire night in the park and worked very hard to make that attitude contagious. I had to go into the First Aid Center at one point during the night and the nurses on duty were so excited to be there!

10 – Secrets – at various points during the night you were able to peek backstage (Disney opened up the passageways between the Tomorrowland Terrace Restaurant and the Plaza to help with crowd control and next to the Crystal Palace). If you timed a ride on the Tomorrowland Transity Authority PeopleMover correctly, you were even able to see the inside of Space Mountain with the lights on!

9 – Repeatability – on certain rides at certain points in the night, Cast Members were encouraging guests to continue riding the attraction if they wanted to. I saw lots of people just staying in their carts on the TTA for a second, third, or even fourth trip around Tomorrowland.

8 – New Discoveries – walking around the park during the late night, I discovered things that I never knew existed. There was a gift shop that I had never been in and didn’t even know it was there.

6 – Games – you can take advantage of the extra time in park to play the Sorcerer’s of the Magic Kingdom game. I tried my hand at it for a few hours during my visit (me and about 300 other people) and loved it. I can’t wait to try it again on my next trip.

5 – Pictures – some people may no focus on taking pictures during their trips to the parks because they are focused on attractions and rides and restaurants. Having 24 hours allows you to be able to take pictures you may not always take. The nighttime in the Magic Kingdom is truly majestic!

4 – Fond Farewell – to close the evening, Mickey and his friends, decked in their pajamas, said goodbye to everyone still in the park from the Main Street, U.S.A. train station. It is an experience that I have not seen duplicated at any other specialty event and was a great way to end the day.

3 – Cleanliness – with guests flocking to the park for an entire day, the maintenance department did a fantastic job of keeping trash, food wrappers, bottles, and cans all cleaned up allowing everyone there to have a great time enjoying the event.

2 – Energy – those people who chose to attend the event had a special energy that was infectious to everyone in the park. The energy certainly waned into the early morning hours, but it was what made the day so magical and projected those in the park to the finish line.

1 – Sunrise over Cinderella’s Castle – I noticed when the park first opened a gaggle of cameras and photographers on the bridge from the Hub to Liberty Square. They were catching the sunrise over Tomorrowland and cresting behind Cinderella’s Castle. It was an amazing site and one that is not often seen.

It appears that Disney is going to make the 24 hour event an annual ritual and there is much to enjoy during 24 hours at the Magic Kingdom. Did you attend this year? What was your favorite part?