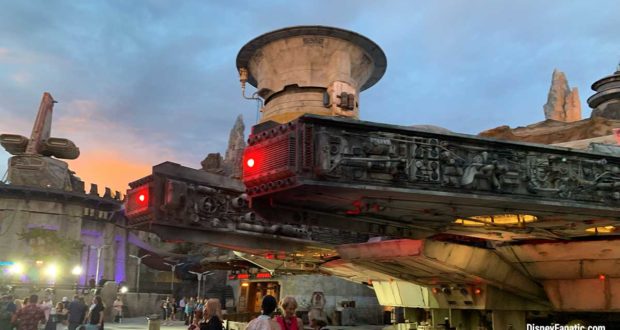 Disney has made a concerted effort in the last five years to plus the experience that guests have while waiting to board their signature attractions at their theme parks. Waiting for Seven Dwarfs Mine Train, guests can participate in several games to occupy their hands and minds, while waiting for Flight of Passage guests can explore the labs, as well as view a full-sized Na’vi avatar. While waiting for Smuggler’s Run, guests are able to view the Millennium Falcon from multiple vantage points, as well as walk through the workshop.

While lines for Smuggler’s Run has fluctuate greatly, Disney anticipated that guests would be spending time in line for the attraction. Through the Disney Play app, guests are able to pass the time quickly by playing multiple mini-games in the app and also learn more about the Millennium Falcon. Make sure your party has a portable battery to re-charge your phone since the app does eat up your battery.

Once aboard the Millennium Falcon, guests are separated into six-person flight crews. Two people will serve as pilots, two as gunners, and two as engineers. Each team has a different set of responsibilities during the flight. And given that there are two sides to the ship, you have six different spots that you can ride every time. We have been trying to be the right-hand side pilot as they are the one who gets to jump to hyperspace.

In addition to the heavily themed queue, as well as the Disney Play app functionality, guests will also enjoy the pre-show aspects of the attraction, too. After making it through the main portion of the queue, guests will learn more about the job they are taking on by participating in smuggling with a face-to-face with a highly advanced Audio-Animatronic, Hondo Ohnaka. After your de-briefing, but before starting your mission, you’ll be able to explore aboard the Millennium Falcon and even have your picture taken at the chess table aboard the ship!

5. Every Ride is Different

Given that you could have a different role every time (similar to Mission: Space), every ride is different because the ride adapts to the personnel aboard the ship and how well (or not well) the piloting and gunning is. During one of our initial rides one of our pilots was trying to take a selfie, so our ride was a little bumpy! However, riding a second time, our crew was much more focus and we were able to get a little more loot during our mission. During these re-rides, you’ll be able to hone your skills and become a better flight crew member!

Not many attractions at Disney World utilize the single rider line, but Smuggler’s Run is one of them! This will allow guests to sneak in another ride without having to wait through the entire standby line. Given that they are filling spots in empty missions (and knowing how crew assignments are handed out), it is likely that single riders will be engineers on each mission! Millennium Falcon: Smuggler’s Run is a fantastic attraction that combines elements of Mission: Space and Star Tours to give guests a unique experience navigating space. The experience of climbing aboard the ship, jumping to light speed, and walking in the footprints of another famous smuggler, Han Solo, this attraction is definitely worth the wait!

Have you ridden Smuggler’s Run yet?