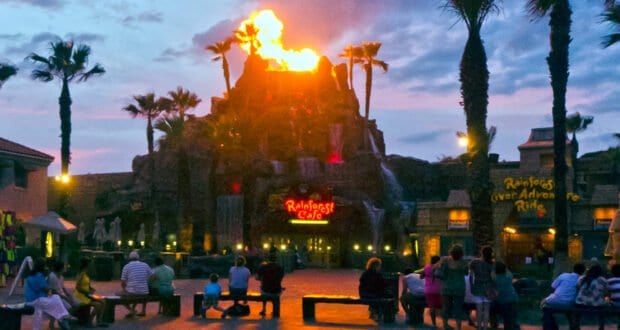 This Rainforest Café Has A Ride & Now We Want One At Disney!

Are you a Rainforest Café fan? With two locations at Walt Disney World including Disney Springs and Disney’s Animal Kingdom, chances are if you’re a regular visitor to Disney you’ve dined at least once in the rainforest! We personally have eaten at both locations multiple times as our kids think it’s a blast and can’t get enough of the regular rain showers that get the animatronic animals moving and talking. With so much to see, and an excellent variety of food, it’s a great place to take the family! But, did you know one Rainforest Café in Texas has a RIDE that goes along with the restaurant?

Attractions360 took to Twitter to share: “Crazy! A Rainforest Café restaurant here in Galveston, Texas has a freaking Raft Dark Ride. The ride is 8 minutes long. Didn’t know this ride existed until a few weeks ago. Admission is only $7.”

We had no idea we were missing out on a this Rainforest Café ride! Ready to take a ride? Here’s a 360 degree ride as shared via YouTuber JohnYChen who says, “The Rain Forest River Adventure Ride is a dark ride at the Rain Forest Café in Galveston. Texas. The ride consists of boats going through an animatronic filled tropical jungle. The ride is included if you get the three park wrist band that includes the Downtown Aquarium, Kemah Boardwalk, and the Galveston Pleasure Pier.” Check out the ride video below:

How fun would this be to enjoy a meal and rainforest ride at one of Walt Disney World’s Rainforest Cafes?! We don’t foresee this attraction coming to Disney but we suppose you just never know! In the meantime, if you’re ever in the Galveston, Texas area, be sure to drop on by Rainforest Café and enjoy the ride.