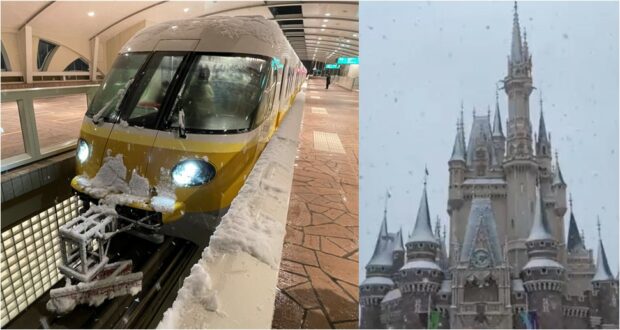 Hello January! Several places across the globe are experiencing snow and ice as we roll through this first month of the new year. While many of us based close to Central Florida’s Walt Disney World Resort may have a hard time thinking of snowfall affecting Disney transportation, well – this Disney Park has to think of the winter weather and find ways to combat it.

Tokyo Disney Resort is experiencing plenty of snow and ice at the moment which makes for a stunning snow-capped Disney Park. Just look at the snowfall over Tokyo’s Haunted Mansion in the video below as shared by @mickeymania1988 on Twitter:

It would be magical however to stand before one of Disney’s castles and watch the snowfall. Here’s a video of Cinderella Castle – and no we don’t mean the one at Walt Disney World, but rather Tokyo’s Cinderella Castle which shares the same name:

But, what’s impressive is Disney’s ability to adjust as needed to the weather. @Itami9018F took to Twitter to show two photos of the Tokyo Disney Resort Monorail with an added snowplow to the front of the Disney transportation option. The tweet translates to, “Type C Yellow is the first operation with a brush!” Check out the images in the tweet below:

Such a brilliant way to adjust the Disney Monorail to keep Guests moving through the Parks and Resorts!

Have you ever been to a Disney Park when it has snowed? Let us know in the comments.