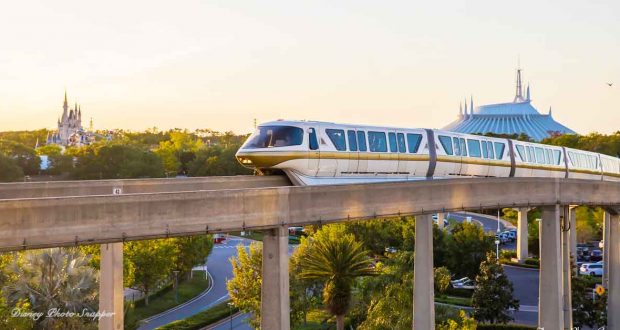 The Walt Disney World Monorail is easily one of the most distinct park symbols to come to mind when you think of Disney World—right along with other iconic images like Cinderella Castle, the Epcot Ball, and several others.  Serving as both an attraction in and of itself, as well as a most unique mode of transportation, the monorail is a right of passage for countless Disney vacationers each and every day. But have you ever stopped to wonder about how it came to be, or how it operates on a daily basis? We’ve compiled a list of 10 fun facts about Disney World’s Monorail System that we feel you ought to know.

Back in the 1950s, while still in the conceptual planning phase for his California theme park, a new and innovative mode of rail travel being tested in Germany quickly caught the attention of Walt Disney. He was so fascinated that he established his own adaptation of this working monorail system, which premiered in Disneyland back in 1959, becoming the first of its kind ever operating in the United States.

With the opening of Walt Disney World Resort in Florida by 1971, a sister fleet of the Disney Monorail System was established with new modernizing developments being incorporated over the next several years. The current 12-train Mark VI fleet serving Walt Disney World Resort has been in operation since the 1990s. Unlike its earlier predecessors in the process, the Mark VI boasts a higher passenger capacity along with improvements in air conditioning, operational door systems, and other overall safety features.

Did you know that the monorail system at Walt Disney World Resort really consists of three separate monorail lines, each with its own designated destination route? These lines include the Resort Monorail, Epcot Monorail, and the Express Monorail.  The Resort Monorail runs on a continuous loop within the Magic Kingdom Resort Area, making stops along the way at Magic Kingdom Park, Disney’s Contemporary Resort, Disney’s Polynesian Village Resort, Disney’s Grand Floridian Resort & Spa, and the Transportation and Ticket Center.

The Epcot Monorail runs a back and forth route between Epcot and the Transportation and Ticket Center. The Express Monorail travels to and from the Magic Kingdom and the Transportation and Ticket Center—a great alternative for those not wishing to make the multiple stops along the way that the Resort Monorail performs. In all, the grand total track mileage comprising of the Disney World Monorail System spans 14.7 miles.

8. A popular way to travel

The reliability and timeliness of the Disney World Monorail makes it a popular pick among vacationers. Each day, services start running 30 minutes prior to the earliest park opening and remain in full operation up through one hour after the latest park closing. And in addition to providing guests with an efficient and most convenient means to travel by, the Walt Disney World Monorail System is heavily sought after as an attraction—one of the famous Disney World must-dos. On any given day the monorails carry thousands of people, with an estimated average of more than 150,000 daily and about 7,000 every hour on the hour. Well over 50 million people travel via Walt Disney World Monorail every year, and since its debut more than one billion people have utilized its services.

Daily maintenance is vital for keeping the monorail trains up to par in safety standards and efficiency, and Disney takes all the necessary precautions quite seriously. There’s even a special maintenance track area just northeast of Magic Kingdom Park, down the road from Disney’s Contemporary Resort, where maintenance and tests are performed each and every morning. Also note that this is where the train cars are retired for the evening after a day’s work and is also where a monorail is taken in the less common event in which it breaks down and cannot be restarted quickly.

Safety tests and daily maintenance first thing in the morning are crucial for carrying out the monorail’s safe and reliable initiative as a popular mode of transportation everyone can count on. While many tests are performed to insure that everything is working well, one such assessment pilots perform by intentionally getting trains too close to each other is done to test the monorail MAPO system, ensuring that the on-board computer turns off the manual controls and initiates the emergency break. The MAPO system, which is such an integral part of all Disney Monorail Systems, was named after Mary Poppins by Walt Disney himself, when profits from the movie were used to create Disney’s new transportation company.

While monorails have the potential to go as fast as 70 miles per hour, the maximum allowable speed during hours of operation typically ranges at around 40 miles per hour or even less. Some parts of the system stay at a speed of just 15 miles per hour. The motors boast 904 horsepower, running off a 600-volt electrical powered system in which metallic buss bars pick up electricity while moving along the track’s beam.

Take a good look at the track beam in which the monorail trains travel by and it may surprise you to realize it’s only 26 inches wide. That’s just two inches more than two feet! Monorail track beams are supported by tapered columns, constructed in sets of six, post-tensioned, and then spaced around 110 feet apart from each to form an overall single structure spanning 600 feet.

Another surprising fact is learning what these beams are made out of. At the center of each beam is a polystyrene (aka Styrofoam) core, which has then been encased in concrete and steel, adding both lightness and sturdiness to the overall structure. Original monorail beams were constructed far north in the state of Washington and then shipped via trucks to sunny central Florida.

Walt Disney World Monorail trains span a total of 203 feet in length and sport an overall height range of just over 10 feet, five inches. Each is comprised of six individual cars that have the capacity to carry up to 364 passengers at a time. Currently there are 12 different monorail trains in use today at Disney World, each one individualized by its own unique colored strip running horizontally down the side of its connected cars.

These colors are black, red, yellow, blue, green, lime, orange, coral, silver, peach, gold, and teal. Monorails rely on commercial grade truck tires for their wheels as they glide along the tracks. Each one has been estimated to drive well over 60,000 miles annually.

While monorail emergencies are thankfully uncommon, Disney has devised a strategic escape plan in the event that there is ever an immediate need for passengers to evacuate. Three different escape routes have been implemented into monorail cars themselves to make this process go smoothly, based on the emergency at hand and quickest way to safety in consideration of that particular event. For example, each individual train car contains a window that can be opened internally, allowing passengers to crawl out to safety. An additional hidden trapdoor can be found on the roof of the train car by removing part of the ceiling.

There’s also a door at the exterior of the monorail that can be opened by releasing air pressure. In the event of necessary and immediate evacuation, the process is usually the same—guests head for the roof of the monorail train car and are then assisted by local officials and authorities to safety. They may even be instructed to walk across the top to the front car where the pilot attaches a rope to be used to crawl down to the lower beam!

While occurrences are rare, we cannot say that the Disney Monorail System hasn’t seen its fair share of incidents over the years. Back in 1985 a fire, said to be caused by a flat tire and the impact of friction, broke out in the rear car of one of the monorails, leading to the evacuation of passengers by kicking out the windows and heading to the top of the train.

Nearly three decades later in 2014 a power failure resulted in one Epcot Line train car to stall on the beam. This left passengers trapped inside for well over an hour before being evacuated by Disney personnel and the local fire department. But it was in July of 2009 that the Walt Disney World Monorail System saw its first and only fatal incident to date—a crash involving the Pink and Purple train cars. While several sustained injuries, one of the pilots sadly lost his life in the collision. As a result, Colors Purple and Pink were the only two monorail colors to ever be retired at Disney World.

The monorail systems at various Disney Parks throughout the world are constant works-in-progress. Overall developments have come a long way since the Disneyland inception of the new-style monorails, and they aren’t over yet. As recently as June 2014 a new automated process has been underway to provide for more efficient service and safety practices. While pilots remain seated in the front cab of each monorail train, their roles have changed to more of a supervisory nature, initiating direct control only in the event of an emergency or necessary intervention.

There have been many new and emerging creative methods for traveling about Walt Disney World Resort in recent years. From the introduction to Minnie Van services by Lyft to the recently launched Disney Skyliner gondolas, and even improvements to the complimentary shuttle services; possibilities for growth and expansion with Disney are seemingly unending. But despite all that, the Walt Disney World Monorail System continues to be the most timeless classic must-do transportation endeavor for countless park goers each and every year.