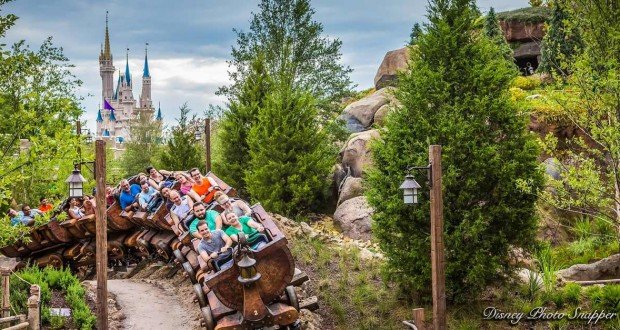 9 – Test Track – located in Epcot’s Future World East, Test Track allows you to design and test your very own Chevrolet concept car. You compete against the other people in your car and all the other riders of the ride during the day. The ride is a true thriller and reaches speeds of 65 MPH, so it is certainly understandable that it is a popular attraction. Wait times routinely exceed over an hour and can approach two hours during the busy times of the year. Epcot has a tiered FastPass system that forces you to choose between Soarin’ and Test Track, so make sure you choose wisely!

8 – Soarin’ – since being introduced in 2005, Soarin’ has been the most popular attraction at Epcot. Routinely at rope drop, hordes of people will fast walk (Cast Members will not allow running) over to Soarin’ in the Land Pavilion. It is usual for wait times to skyrocket to 45-50 minutes within 15 minutes of the park opening. The ride is certainly dynamic – who doesn’t love the smells of the California landscape? We are also intrigued and excited about the addition of a new theatre to ease wait times and rumors that Disney is going to add new movies to the attraction.

7 – Wishes! – the fireworks show at Magic Kingdom is amazing. Using Cinderella’s Castle as a centerpiece, the show features great pyrotechnics and music. With the advent of the FastPass system, Disney has added many elements to enhance guests viewing of Wishes (special viewing areas located in the Hub and the Tomorrowland Terrace Wishes Dessert Party). However, these additions have brought more people to the parks to watch the show. I recently had the opportunity to experience trying to get into the Magic Kingdom just as Wishes was finishing. It was somewhat traumatic going against the stream of tired families pushing strollers and carrying bags.

6 – Toy Story Midway Mania – this ride located in Pixar Place in Disney’s Hollywood Studios, is great fun for the entire family. Much like Soarin’, many families will go directly to this attraction at rope drop. The ride does have the benefit of an interesting queue (you are shrunk down to the size of Buzz and Woody and get to explore Andy’s room), but that is not enough to distract you on days when the waits exceed 120 minutes. When Disney announced the expansion of Soarin’, a similar announcement was made for Toy Story Midway Mania. We will hold our breath to see if the addition of another track eases wait times (or drives them even further up)!

5 – Seven Dwarfs Mine Train – the newest roller coaster in Disney World is located in New Fantasyland. The line does get crowded quickly with wait times varying throughout the day with a high wait time of about 90 minutes. Imagineers did design the ride with an interactive queue line to aid in the process of waiting in line, but these sometimes cause bottlenecks and delays because people are more focused on those distractions than actually paying attention to the line moving forward! I think as more people experience the ride (and the line), wait times will flatten out and probably get better, but for the time being, be prepared to wait!

4 – Tower of Terror – the new “mascot” of Hollywood Studios located at the end of Sunset Boulevard takes guests on an unpredictable 13 story journey. Once the queue moves in doors, it does have a lot of details to enjoy, but that is towards the end of the waiting. Most of the wait is done outside, so if it is hot or rainy, that will make the experience less pleasurable. It does also tend to get crowded when you are waiting to board your elevator in the basement, too.

3 – Princess Fairytale Hall – with the arrival of Anna and Elsa in the Magic Kingdom, the line for this attraction is consistently above two hours (highest I have seen is 185 minutes) for standby guests. FastPasses for this meet and greet are routinely snatched up quickly upon being released at the 60 day booking window. The line itself is just switchbacks, so nothing fun and interesting to distract the little ones. I have had the ability to “walk on” this attraction with a 15 minute wait (and that was during Extra Magic Hours at about 1:30 AM)! Much like Soarin’, the cast members at Magic Kingdom will control the chaos at rope drop and actually form a human chain to prevent guests from making a mad dash to see them!

2 – Peter Pan’s Flight – one of the most classic attractions at any of the Disney parks remains one of the most popular. Guests are treated to a birdseye view of London and Neverland. The ride does not offer any thrills or chills, just a return to beloved classic. The line has recently been updated to include some interactive elements, but it is still mostly a switchback line, so the crowds do make the waiting a little more trying for everyone involved. FastPass will get you past all of that!

1 – Fantasmic! – Hollywood Studio’s show is great! It features all of the characters from the Disney catalog and the auditorium holds a lot of people. But, the entire ampitheatre bottlenecks when trying to leave at the end of the night. The walk is also somewhat far, too, so that does not make the experience any better either. Try and wait and let some of the crowds disperse before trying to leave.

Crowds at Walt Disney World go with the territory, but if you know where the most crowded areas are before heading the parks, it will help you decide where to spend your time and the best time to hit those areas! What is your favorite crowded experience at Walt Disney World?

For more details on crowd-heavy experiences at Disney World, consider planning and booking your next Disney trip with an Authorized Disney Vacation Planner you can trust like Mickey Travels. They’ll help you get the best price for your vacation, share expert advice and their services are totally FREE! It’s genius!